Cool Runnings: Lockheed using microscopic drops of water to chill chips from the inside

Every year, electronic components shrink a bit more, allowing engineers to create more powerful and sophisticated chips. Unfortunately, these chips also generate a lot of heat, so novel cooling systems are needed to keep them running. As part of DARPA’s ICECool-Applications research program, Lockheed Martin is developing a way of cooling high-powered microchips from the inside using microscopic drops of water. 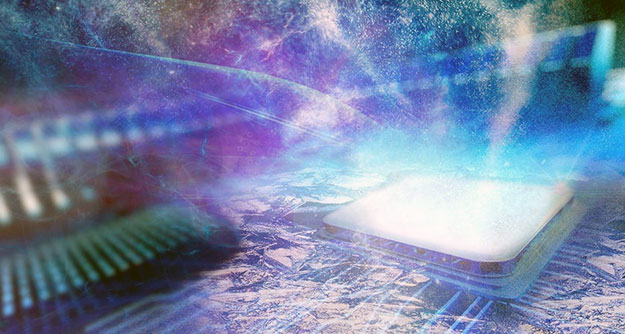 Ever since the first vacuum tube was invented by John Fleming in 1904, heat has been the nemesis of electronics. It’s one reason why old radio sets are built like furniture and why the first computers filled whole rooms. Each valve was basically an incandescent bulb and air needed to circulate around them to keep them cool.

Even the first satellites using first-generation solid state circuits needed air cooling. That’s why early satellites like Sputnik and Vanguard looked like grapefruits with spikes sticking out. The spherical case held air to draw the heat away from the electronics, so it could dissipate through the metal casing.

Today, the heat generated by microelectronics limits their life and efficiency. Computers need fans or other ways of circulating air and high-powered systems have water circulators to keep them cool. Unfortunately, as chips become ever smaller, more compact, and more powerful, the heating problem becomes more acute.

“Right now, we’re limited in the power we can put into microchips,” says John Ditri, the Principal Investigator on Lockheed Martin’s ICECool effort. “One of the biggest challenges is managing the heat. If you can manage the heat, you can use fewer chips and that means using less material, which results in cost savings as well as reduced system size and weight. If you manage the heat and use the same number of chips, you’ll get even greater performance in your system.”

DARPA’s Microsystems Technology Office’s (MTO) Inter/Intra Chip Enhanced Cooling (ICECool) program aims to move away from conventional remote cooling by creating cooling systems that are embedded in the chips themselves. Lockheed’s approach to the problem is called “microfluidic cooling,” where the cooling is done by integrating a cooling system into the chip that uses microscopic drops of water to draw heat away from the circuitry and direct it to lower conducting layers for dissipation.

So far, Lockheed has carried out two phases in the development of microfluidic cooling. In Phase I, the water droplets were incorporated into high-powered Radio Frequency (RF) chips. Using a thermal demonstration die, the Lockheed team found that the droplets dissipated a 1 kW/cm2 die-level heat flux with multiple local 30 kW/cm2 hot spots. Put simply, this means that the chip handled four or five times more heat per unit area than conventional chips.

In Phase II, the Lockheed team moved on to high-power RF amplifiers to validate the technology. In this phase, the amplifier demonstrated a six-fold increase in RF power output, yet still ran cooler than a conventionally cooled version.

Lockheed says that it is currently building a fully functional, micro-fluidically cooled, transmit antenna prototype to further develop the technology. In addition, the company is working with American semiconductor maker Qorvo to integrate the cooling system into gallium nitride chips and, later, gallium arsenide chips

When fully mature, Lockheed says that microfluidic cooling could have applications in electronic warfare, radars, high-performance computers, and data servers.