One of the most fascinating creatures of the sea would be jellyfishes. Due to the rapid increment of the jellyfish population over the recent years, it has led to scientists believing that jellyfishes might take over the World’s ocean in the future! Contrary to popular belief, vast majority of the jellyfishes aren’t dangerous to humans, while the few are certainly painful and often deadly! 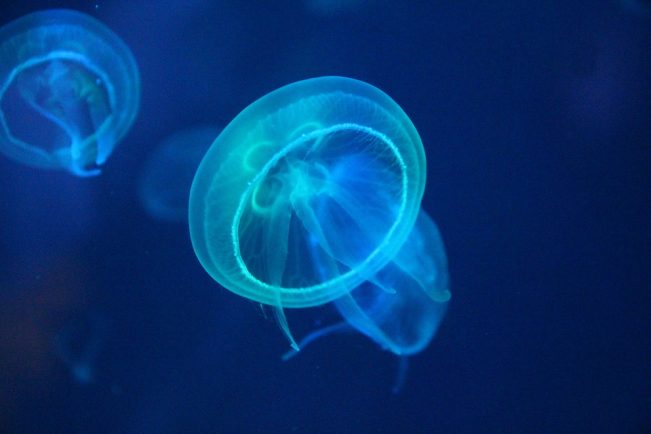 Jellyfishes are very interesting creatures that have a very long history behind them, dating back from approximately 205 million years ago! Here are 7 amazing facts about this captivating creature that you should know.

1. Some Jellyfishes are Immortal
Since ancient times, humans have yearned to find the answer to immortality. In that aspect, certain species of jellyfish have found the answer to that question. They remain immortal by converting their cells from one type to another. More specifically, the species, Turritopsis nutricula, is able to travel backward in time and revert to its starting phrase of life. More terrifyingly, jellyfish are able to clone themselves! When being cut into two, they are able to regenerate and create two individual organisms. If it’s injured, it may clone itself and produce hundreds of offspring!

2. Jellyfishes are able to Effectively Shut down Nuclear Reactors
Nuclear power plants are usually built near the ocean as they need a constant flow of water to cool their reactor and turbine systems. Due to overfishing and the reduced amount of predators of jellyfishes, the jellyfish’s population has been on the rise in recent times. As a result, there are more frequent incidents of jellyfish swarm clogging up the nuclear reactors. This problem might become more serious if no countermeasures are taken.

3. Jellyfish are becoming Important in Modern Medicine
Jellyfishes have unique genetics that gave breakthrough in medicine. One discovery that was made by Swedish researchers was that common North American jellyfish species, Aequorea Victoria, can be extracted to create a biofuel cell that will generate enough to power microscopic nanodevices. Scientists have also developed a process that uses luminous cells from jellyfishes to diagnose cancer tumors deep within the human body. In time to come, I believe there will be more and more uses for jellyfishes in the medical field as many scientists are still many researches ongoing.

4. The Deadliest Jellyfish can probably kill you in a Couple of Minutes
While most jellyfishes aren’t dangerous to humans, the Sea Wasp Box Jellyfish is one of the deadliest creatures on the planet. Also known as the marine stinger, this jellyfish have taken over 5000 lives since 1955. This creature has 15 tentacles, each loaded with around half million darts, in which contains venom theoretically being able to kill up to 60 people! The venom is fast-acting, and can cause cardiac arrest within minutes. Worse still, the sting is extremely painful, and might cause death even before the venom does.

5. Actually, Most Jellyfishes Don’t live that Long
Despite having the notorious Turritopsis nutricula for being crowned as the immortal jellyfish, most jellyfish live only up to a year. In fact, the smaller ones only live for a couple of days. Jellyfishes are food for many marine animals such as large fishes and turtles. Interestingly, jellyfishes are pretty important to the ecosystem of the ocean despite of the bad reputation they have. They provide shelter for many baby fishes which protects them from eaten by predators. Amazingly, young crabs often hitchhike on the top of jellyfishes so they don’t have to swim!

6. Jellyfishes are Unyielding to Environmental Conditions
Jellyfishes are one of the very few creatures that can adapt to tough living conditions such as oceans where there is little oxygen and lots of pollution. Many scientists believe the reason of rapid increase of jellyfishes is due to the worsening environment of the ocean. Currently, jellyfishes account for more than 10 times the weight of the annual fish catch around the world!

7. Jellyfishes are Eating, Reproducing Machines that’s almost Impossible to Kill
Jellyfishes are artificially distributed into nonnative habitats by the shipping industry. When they are transported to new ecosystems, they often have no natural predators. When that happens, they become top of the food chain in that ecosystem. Even though it needs to eat 16 percent of its body weight to keep growing, they can put away 10 times its body weight in a single day! On top of being an eating machine, their unrivalled ability to reproduce via cloning makes matter worse. In fact, when you cut some species, it actually creates exponentially more of them!