This Water Bottle Refills Itself From Moisture in the Air

13 But much of that freshwater is locked up as ice in glaciers, ice caps and permafrost. People get most of their water from rivers, which make up only 0.49 percent of surface freshwater. What if we could diversify and pull water from the air, instead? 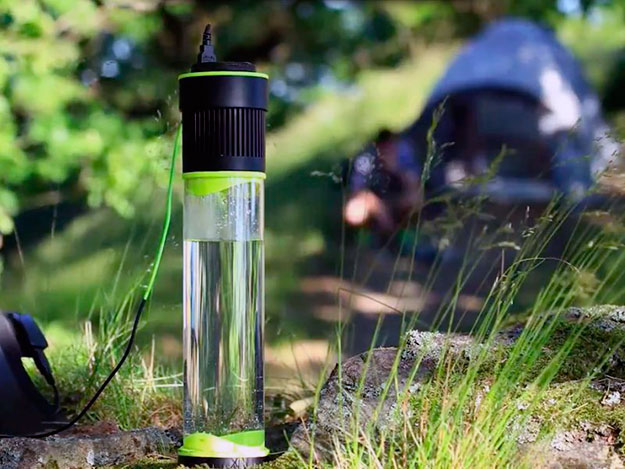 The water bottle comes from Austrian industrial designer Kristof Retezár, who wanted to make a simple, portable tool to help people where drinkable water isn’t easy to get. Engineers have long hoped to help water-scarce regions by achieving this goal. The UN Department of Economic and Social Affairs reports that 1.2 billion people, around a fifth of the world’s population, live in areas where water is physically scarce. Another 1.6 live in countries where water infrastructure and storage is lacking.

“You always have a certain percentage of humidity in the air, it doesn’t matter where you are—even in the desert,” Retezár tells Denise Chow at Livescience. “That means you would always potentially be able to extract that humidity from the air.”

The Fontus uses solar energy to power a small cooler or condenser that works by the so-called Peltier effect. This condenser creates a temperature differential drawing heat from one side of the device to the other. This leaves two chambers: one cold and the other hot. Air flows into both these chambers separately, but when air passes over the hot side, the slight cooling of that chamber causes the cold chamber to chill even more. That means that the air passing through the cold chamber rapidly condenses like droplets on the outside of a cold glass.

One version of the design, the Ryde, takes advantage of air flow on a bike, producing water as the user rides. Hikers can use another version called the Airo, which uses a small fan to create the air flow.

In “really good” conditions, or temperatures between 86 and 104 degrees with humidity between 80 and 90 percent, the Fontus can generate half a liter of water in an hour, Chow reports for Livescience.

In the future, Retezár says the company hopes to improve that so the bottle can work in more conditions. They also may also install a carbon filter to deal with particulates in the air: Already the bottle has a basic filter to keep out bugs and dirt, but works best in the relatively pristine air of natural environments.

The project was shortlisted for the 2014 James Dyson Award. Next the company hopes to launch a crowdfunding campaign and get the price of the water bottle under $100, Chow writes. It has a long way to go before it can truly help people in water scarce areas, but innovative projects that force us to rethink how we live always generate some excitement.