Researchers have accidentally created nanorods that can absorb water at low humidity and expel it as the humidity increases
Learning from your mistakes is a key life lesson, and it’s one that researchers at Pacific Northwest National Laboratory (PNNL) can attest to. After unintentionally creating carbon-rich nanorods, the team realized its accidental invention behaves weirdly with water, demonstrating a 20-year old theory and potentially paving the way to low-energy water harvesting systems and sweat-removing fabrics. 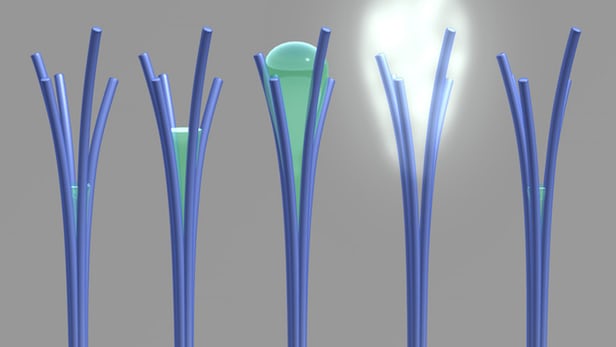 The researchers note that ordinarily materials will absorb more water as the humidity in the air around them increases. But between 50 and 80 percent relative humidity, these nanorods will actually do the opposite and expel water, a behavior they say is not shared by any other material. Below that range, they behave as normal, so the process is reversible by lowering the humidity again.
“Our unusual material behaves a bit like a sponge; it wrings itself out halfway before it’s fully saturated with water,” says David Lao, PNNL research associate and creator of the material.

These nanorods were created by mistake while trying to fabricate magnetic nanowires, and the researchers decided to give the accidents a closer look. On examining them with a vapor analysis instrument, Satish Nune, one of the authors of the research paper, noticed that the structures were actually losing weight as the humidity increased.

Assuming the equipment was malfunctioning, the scientists switched to a microscope, and were able to observe water appearing from between the branches of the nanorods, and then evaporating at a higher humidity.

On researching why this was the case, the team looked to previous works and found papers from 2012 and 2013 explaining how water can spontaneously vaporize when confined in an area just 1.5 nm wide, or when tightly surrounded by hydrophobic materials. Observations even go as far back as the 1990s, when scientists experimenting with crystallized proteins noticed similar happenings and theorized that some unknown process was allowing the water to rapidly evaporate.

The recent research at PNNL appears to be the first time this phenomenon has been directly seen in action. The team’s hypothesis was that the water is condensing and drawing the branches of the nanorods together, and when they reach the 1.5 nm threshold, as specified in the previous work, the water quickly evaporates.

“Now that we’ve gotten over the initial shock of this unforeseen behavior, we’re imagining the many ways it could be harnessed to improve the quality of our lives,” says David Heldebrant, the second author of the paper.

Potential applications include a system to take in moisture from the air in a desert and then eject the collected water when a certain humidity level is reached, or as a membrane in clothing to remove sweat, convert it to vapor for expulsion outside.

“But before we can put these nanorods to good use, we need to be able to control and perfect their size and shape,” says Nune. To that end, the team is aiming to improve the efficiency of the nanorods’ water-spitting abilities beyond its current estimated capacity of 10 to 20 percent. Further research will examine the nanorods’ chemical and physical properties, and determine if the method can be used in different nanomaterials to collect other liquids, such as methanol.