A River Runs Through It: Scientists Explain Arctic Mercury

Scientists have been explaining for years that the Arctic is a key region when it comes to climate change, what with thinning ice, melting permafrost and the loss of habitat crucial to the survival of major species including seals, walruses and polar bears.

Now, says a study just published in Nature Geoscience, we can add one more insult to the Arctic ecosystem that may well be at least partly climate-related: significant amounts of toxic mercury flushed into the Arctic Ocean every spring by three mighty rivers most Americans have probably never heard of: the Lena, the Ob, and the Yenisei, all of which flow north through Siberia.

“We’ve known for a long time that there’s a high concentration of mercury in Arctic biota,” said the study’s lead author, Jenny Fisher, a postdoctoral fellow with Harvard’s Atmospheric Chemistry Modeling Group in an interview. Once the neurotoxic (nerve-killing) heavy metal gets into the food supply, it doesn’t break down. Instead, it gets concentrated as bigger animals eat smaller animals on up the food chain, from plankton to fish to seals on up to polar bears, and also the indigenous Inuit, who get much of their nourishment through hunting. 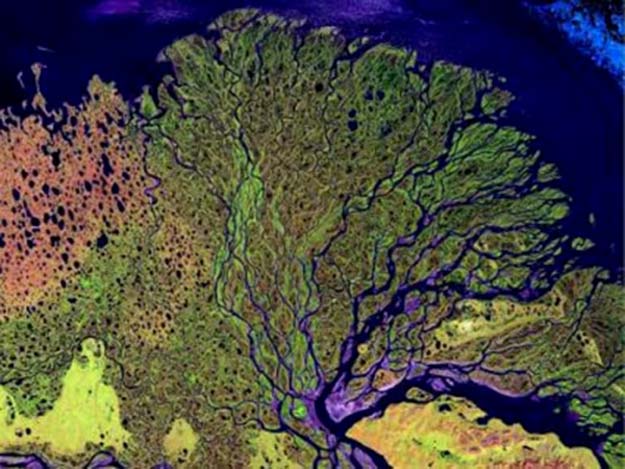 Environmental experts have assumed that the mercury gets up to high latitudes through the atmosphere. It’s belched out through smokestacks of coal-burning power plants and other industrial sources and wafts up into the air, where it can circulate for a year or more before being washed out by precipitation. It all made sense in a general sort of way.

But when Harvard atmospheric chemist Elsie Sunderland and a team of researchers began looking into the details, Fisher said, the atmospheric explanation didn’t hang together. Mercury levels tend to peak in the Arctic atmosphere in summer, but power-plant emissions are also highest in summer, when air conditioning sends the demand for electricity soaring. “It didn’t make sense,” Fisher said, because it should take time for the mercury to make its way north.

So the scientists looked at other phenomena that might explain the summertime Arctic mercury spike. “The only thing that had the right signature is rivers,” Fisher said. The Lena, Yenisei and Ob are all frozen during the long Siberian winter; when the ice finally breaks up in spring, a massive surge of water pours into the Arctic ocean — at just the time when mercury levels tend to spike. With ice cover melting back in the ocean as well, the mercury is free to enter the atmosphere, boosting concentrations far higher than they’d otherwise be. In fact, argue Fisher, Sunderland and the other scientists on the team, it looks as though twice as much mercury comes from Siberian rivers as comes from northward-drifting air.

That raises an obvious question: how does mercury get into Siberian rivers? “There’s a lot of uncertainty about that,” Fisher said. One possibility is waste from Russian mining operations in the region. But another — or, rather, two others — may be a result of climate change. As the Siberian permafrost softens and melts during the increasingly warm Arctic summers, naturally occurring mercury may be leaching of the soil where it’s been frozen in place for tens of thousands of years.

The second possibility: scientists have already noted that rising global temperatures have begun to alter the hydrologic cycle, which circulates water from the oceans to the atmosphere and back. The main effect is to make rainstorms more intense in some places and droughts more intense in others. That could tend to wash more mercury from melting permafrost into the rivers.

It’s still just a hypothesis, Fisher said. “We really have limited knowledge of what’s really going on, and we’re hoping this work inspires more research. But it may be,” she said, “that climate change affects the Arctic in more ways than we thought.”