According to the latest report by the World Health Organization, nearly two billion people lack access to clean drinking water. To address this problem, researchers from UC Berkeley and MIT have created a solar-powered device that can be used in places like the desert to harvest water from a relatively untapped resource: air, which contains an estimated 13,000 trillion liters of water. 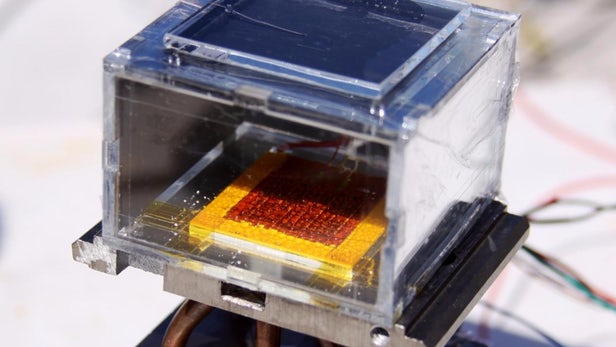 To be fair, the idea of harvesting water from air isn’t new. Companies such as Warka Water, EcoloBlue and Water Gen have already shown that this can be done. However these water-acquisition systems usually require certain conditions in order to work, such as high humidity levels or a power source. The team behind the solar harvester, led by UC Berkeley’s Omar Yaghi, wanted to develop a solution that could be used even by those living in arid and drought-hit regions without access to electricity.

To do this, they turned to a class of synthetic materials known as metal-organic frameworks (MOFs), which he pioneered more than 20 years ago. These compounds feature a combination of metals that are stitched together with organic molecules in a tinker-toy arrangement.

An illustration of the MOF structure (Credit: UC Berkeley)

Doing so creates rigid, porous structures that can trap gaseous and liquid molecules while allowing unwanted elements to flow through. To date, MOFs have been used to capture gasses such as carbon dioxide, hydrogen and methane.

In this case, the water harvester makes use of a zirconium-based MOF that Yaghi and his colleagues at UC Berkeley developed to capture water molecules in 2014. The material, which is sandwiched between a solar absorber and a condenser place, captures water molecules in the air that flows through the open chamber. Then, sunlight heats up the MOF and drives the water molecules toward the condenser where they form into water droplets that drip onto a collector. 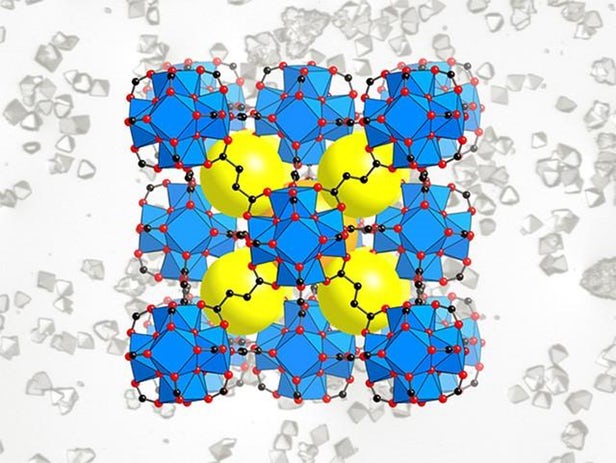 “This work offers a new way to harvest water from air that does not require high relative humidity conditions and is much more energy efficient than other existing technologies,” says Evelyn Wang, head of MIT’s device research laboratory, whose team designed the system.

According to the study, the prototype was able to extract 2.8 liters (3 quarts) of water from the air over a 12-hour period, using one kilogram (2.2 pounds) of MOF at humidity levels as low as 20 percent.

Describing the results as “a major breakthrough” for harvesting water from air at low humidity, Yaghi says this technology opens the door to what he calls “personalized water,” making possible a future where households in poorer countries can make use of the device to produce their own water without having to travel long distances to find it. That said, its application is not limited to supplying clean drinking water. The material’s huge surface area could see the device being scaled up and used to irrigate farms, and since the technology is passive, it does not require solar panels or batteries either.

That said, the researchers acknowledge that there is much room for improvement before it can be commercialized. At present, the MOF can absorb only 20 percent of its weight in water and at about US$150 a kilogram, zirconium would put the device beyond the reach of those who need it most. Using the right material could increase the absorption rate by at least 40 percent while keeping costs down. According to Yaghi, the group has already had promising early results using aluminum, which is 100 times cheaper than zirconium.

At the same time, Wang’s team is also working on improving the harvesting system so it can produce water round the clock and not just during the day.

“To have water running all the time, you could design a system that absorbs the humidity during the night and evolves it during the day,” explains Yaghi. “Or design the solar collector to allow for this at a much faster rate, where more air is pushed in. We wanted to demonstrate that if you are cut off somewhere in the desert, you could survive because of this device. A person needs about a Coke can of water per day. That is something one could collect in less than an hour with this system.”

Given that companies such as German chemical producer BASF are already testing MOFs in commercial applications, the researchers are hopeful that it won’t be too long before they arrive at a viable solution.

“We have now laid both the experimental and theoretical foundations so that we can screen other MOFs, thousands of which could be made, to find even better materials,” says Yaghi. “There is a lot of potential for scaling up the amount of water that is being harvested. It is just a matter of further engineering now.”

Yaghi talks about his work in the video below.

The study was published in Science.