Salt of the Earth: Dead Sea and Other Amazing Lakes

Salty lakes on our planet are not uncommon, although many of us think that there are much more freshwater ones. These lakes may look like small seas or as very modest ponds, but the size here is not the main thing. Each one has a unique ecosystem, and each one has its own mystery. They can be admired, they can get the right substances, they will help to improve health and tell about the past of the Earth. So, we represent TOP-9 amazing salt lakes. 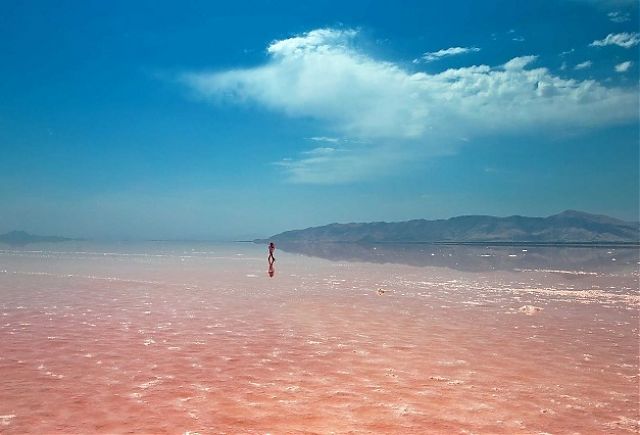 Where do they come from? As a rule, the salt concentration in the inland reservoirs grows gradually, as the water evaporates. In this case, the source of salts can be both rocks and groundwater, but the main factor is a decrease in volume. This process can take thousands of years, but human intervention accelerates it at times. An example is the Aral Sea. If water is actively used by people for various needs, and its inflow decreases, the ordinary lake can dry up and become salty for several decades. The water in it is no longer suitable for drinking or fields irrigation. Lakes salinity is one of the pressing problems associated with the global water shortage.

Underwater salt lakes at the bottom of the ocean (there are some!) arose differently. Millions of years ago, the seas dried up, and in their place a very thick salts layer was formed. And then the water returned, and at the deepest depth appeared a kind of a brine, which because of its high density did not mix with the waters of the returned ocean.

Salt lakes are also formed in craters of volcanoes.

The salinity of lakes is measured in ppm: this value reflects how many grams of salt are contained in one liter of water. For example, for the Red Sea, this figure is about 40, for the Gulf of Finland – 2, and for the Dead Sea – about 300.

What’s the salt of it? People have used mineral lakes since the ancient times. First, the habit of salting food forced to seek for salt sources. Secondly, bathing in salt water turned out to be beneficial for health, and the deposits of medicinal clay along the lakes shores were an excellent cosmetic means. In addition, from salt water it is possible to extract various substances necessary for medicine and industry. Unique extremophile bacteria that live peacefully even in a very salty water are of great interest from the biotechnological point of view. They can be used to extract metals from ore, or to treat sewage. 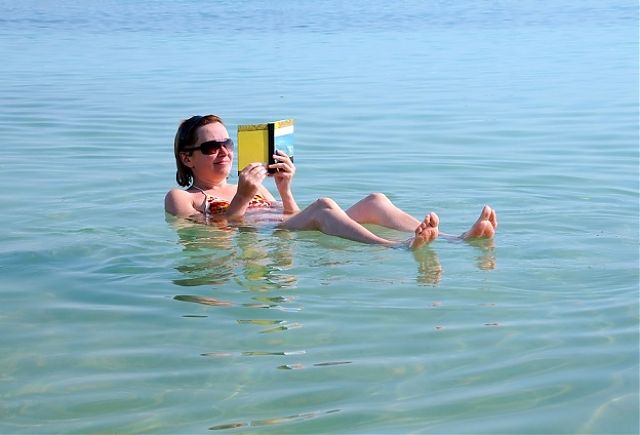 1. Urmia (Iran). Once this lake was the largest in the Middle East. However, recently it is getting smaller and smaller – it’s possible to see it on the images taken from space. Unreasonable water flow from rivers to irrigation led to the fact that in 40 years the reservoir decreased by 70%. The water in it usually has a pinkish shade – due to the multiplying alga Dunaliella. After the winter and spring rains, Urmia again turns blue. The salinity of water falls from 260 to 150-80 ppm. In the lake there are more than a hundred islands, some of which are covered with pistachio forests. Pelicans and flamingos nest here. If the Iran government does not implement the program to save Urmia, the lake will dry up completely and 10 billion tons of salt will remain in its place, scientists warn.

2. The Dead Sea (Israel, Palestine, Jordan). One of the most famous salt lakes in the world. Its length is 50 km, the maximum width is 18 km. The main feature of this reservoir is that it is located at the lowest point on the land – at 400-plus meters below sea level. The main source of water in the lake is the Jordan River. 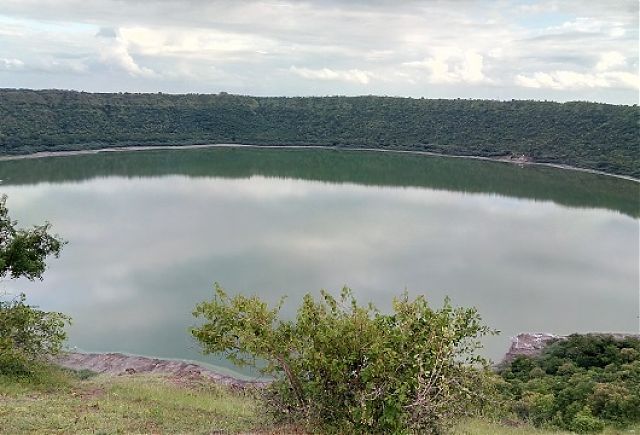 This is one of the first health resorts in the history of mankind. Since the ancient times, potassium carbonate (potash) was also mined here for soil fertilization. The Dead Sea was called Asphalt, and it is not accidental: in its depth natural asphalt is formed, which was used by ancient Egyptians used to mummify the deceased bodies.

Environmentalists are concerned that the Dead Sea water level falls by an average of 1 meter per year. This is due to the active use of groundwater, the extraction of minerals by evaporation and climatic changes.

3. Lonar (India). It is located in the crater that appeared in the basalt rock after the meteorite fall – this is the only crater of this kind on Earth. The name Lonar is translated simply as salt lake. 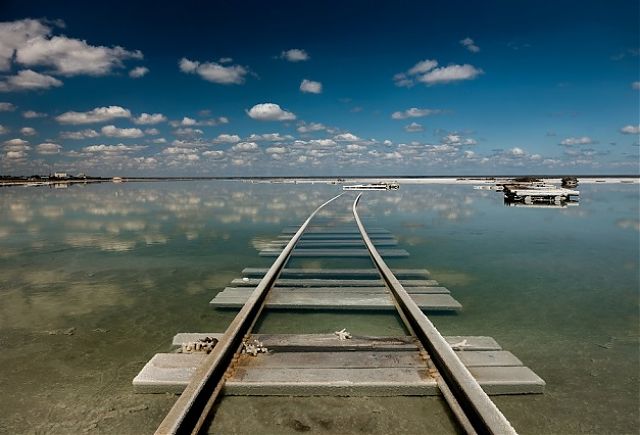 The lake is saline and alkaline. The salinity of water in it is 10.7 g / l. The diameter of the lake is 1 km, and the depth is more than 130 m. The water is cloudy-green and has a rotten smell, so it’s not too pleasant to be on its shore.

Since 1842, commercial salt extraction was conducted on the lake. On sale there were five or six kinds of salt from Lonar, different in composition and color. Now it is consumed only by local people. In Lake Lonar, a rare mineral called geylussite is found – these transparent crystals resemble crystal.

4. Baskunchak (Russia). Located in the Astrakhan region. The lake area is about 106 square kilometers, the salinity is about 300 g / l.

Basically, the lake is fed by underground sources. The salt extraction has been conducted here since the VIII century. Especially for its export, the Baskunchak railway was built from the lake to the Vladimir dock on Volga. Today, from 1.5 to 5 million tons of NaCl annually are got from the lake. 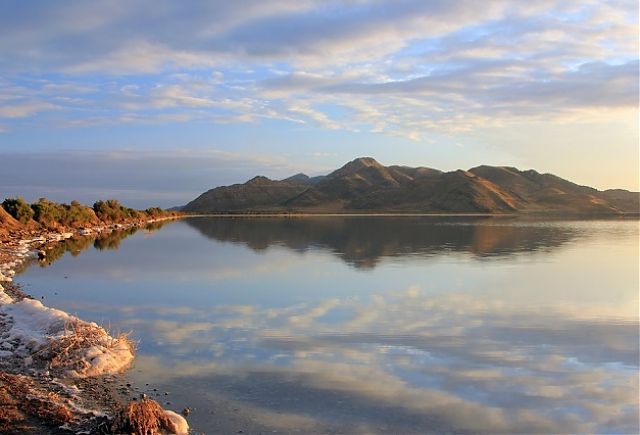 Above the surface of the lake you can see mysterious pillars covered with salt crust. They are left from the footbridge, on which, before the 1917 revolution, workers who collected salt, went to work. The Baskunchak sanatorium, which is located on the shore, is very popular with tourists. Saline and mud baths help to cure many diseases.

5. The Great Salt Lake (USA). It is located in Utah and is the largest saline lake in the Western Hemisphere. Water salinity in the lake also varies depending on the water level, ranging from 137 to 300 ppm.

A large salt lake is also known for the fact that it regularly causes heavy snowfalls. There are no miracles here. Just in winter, the water in the lake is much warmer than the air above it, which leads to the formation of clouds and precipitation. On the shores of the Great Salt Lake you can see oolithic sand. It consists of mineral formations of round or spherical shape resembling very small pearls. 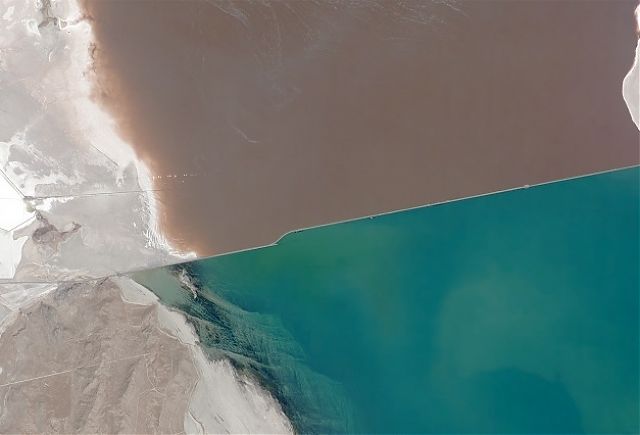 The lake is divided into two parts by a dam, along which trains run. The southern and northern parts have different salinity and, consequently, a different color due to the different algae types spread. In 1970, on the shore of the lake, there was made an installation Spiral Dam, created by the American artist Robert Smithson. The object is visible only when the water level in the lake drops to 1,280 meters above sea level.

There are a lot of legends about the lake. For example, they say that in 1875 two whales were released into the pond – in order to attract more tourists. Since then, no one has ever seen a whale. Another story is related to the local Nessie – Monster of the North Coast, who once allegedly attacked the workers.

6. Don Juan (Antarctica). The name of this small pond is not due to the famous hero-lover, but to two pilots of helicopters. They were called Don Po and John Hickey, and in 1961 they flew over the lake and noticed that the water in it did not freeze, despite a 30-degree frost. Subsequently it was found out: the lake salinity is so high that it is not covered by ice even at minus 53 degrees! The salt content in Don Juan is more than 400 grams per liter. The water sources in the lake are melting glaciers. The reservoir surface area is only 0.3 km. There were no signs of life in the lake. Experts note that the conditions in this area resemble the Martian ones. 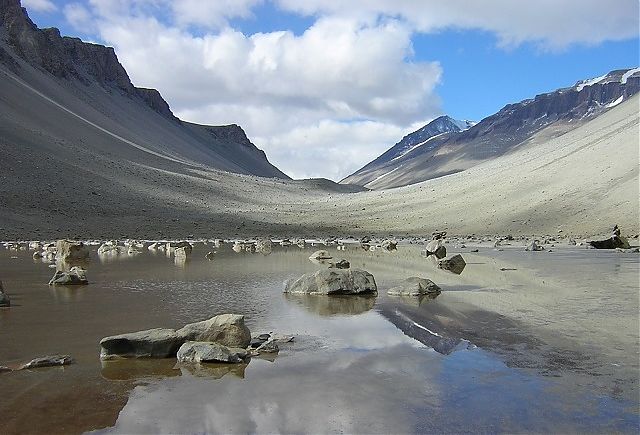 7. Assal (Djibouti, East Africa). One of the most saline lakes of the planet (up to 400 grams per liter) is located in the crater of an extinct volcano. This is the lowest point in Africa. The reservoir is 19 km long and 6.5 km wide. During the day, the water in the lake changes its shade in a bizarre way, up to fluorescent colors. Salt is mined on an industrial scale, at the same time nomads in the old fashion way evaporate it on the lake shores and send to Ethiopia on camels. 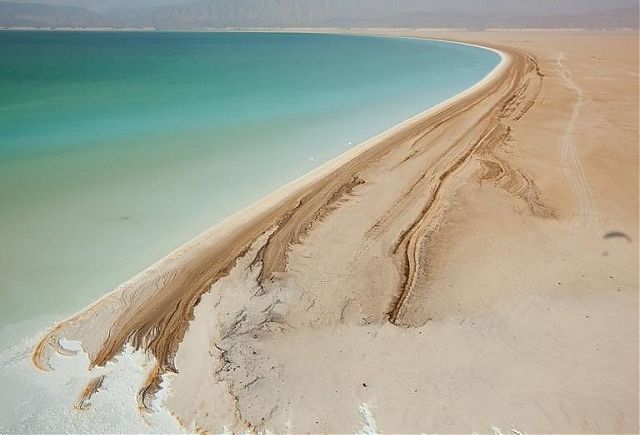 8. Socompa (Argentina, Chile). The lake is located on the border of two states, in the Argentine Andes, at an altitude of 3600 meters above sea level. There was a time when this reservoir was considered exclusively as a source of lithium, without which it is impossible, for example, to produce batteries. This metal was produced by evaporating the brine in the sun. However, now Socompa and other salt lakes of the Andes are turned into specially protected natural sites. The reason is that scientists discovered stromatolites in the water, layered structures formed by minerals and cyanobacteria. These are the most ancient ecosystems on Earth. The age of some findings is several billion years, and they can help scientists to learn more about the life origin on our planet. 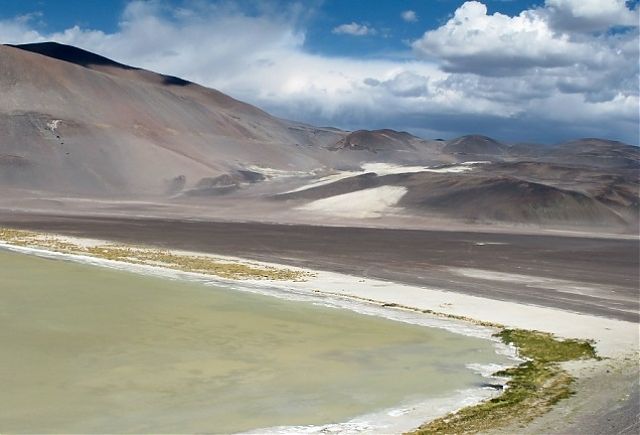 9. Underwater salt lakes (the Gulf of Mexico). The more salty is water, the higher is its density – so the numerous lakes on the bottom of the bay have quite clear boundaries. Water in salt pools is 4-5 times brighter than ocean water. If a submarine descends to such a pond, it begins to slide over its surface. Underwater lakes have a length from 1 m to 20 km. As a rule, the concentration of methane there is high and extremophiles are the only living beings adapted to harsh conditions and can live there. For example, bacteria and mussels, tubular worms and shrimp. Scientists believe that such creatures could easily survive on the other planets.