Seawater is water from a sea or ocean

On average, seawater in the world’s oceans has a salinity of approximately 3.5%, or 35 parts per thousand. 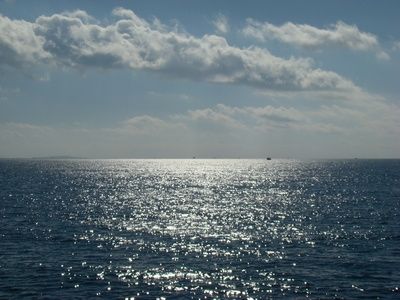 This means that for every 1 litre (1000 mL) of seawater there are 35 grams of salts (mostly, but not entirely, sodium chloride) dissolved in it.

Although a vast majority of seawater is found in oceans with salinity around 3.5%, seawater is not uniformly saline throughout the world.

The planet’s freshest (least saline) sea water is in the eastern parts of Gulf of Finland and in the northern end of Gulf of Bothnia, both part of the Baltic Sea.

The most saline open sea is the Red Sea, where high temperatures and confined circulation result in high rates of surface evaporation and there is little fresh inflow from rivers.

The salinity in isolated seas and salt-water lakes (for example, the Dead Sea) can be considerably greater.

Seawater is more enriched in dissolved ions of all types compared to fresh water. Scientific theories behind the origins of sea salt started with Sir Edmond Halley in 1715, who proposed that salt and other minerals were carried into the sea by rivers, having been leached out of the ground by rainfall runoff.

Upon reaching the ocean, these salts would be retained and concentrated as the process of evaporation removed the water.

Halley noted that of the small number of lakes in the world without ocean outlets (such as the Dead Sea and the Caspian Sea), most have high salt content.

In addition, sodium was leached out of the ocean floor when the oceans first formed.