Water May Lurk Beneath the Moon’s Surface

Future lunar settlers may not have to worry about carrying water from Earth. According to new research, there could be large amounts of water just under the orb’s surface. 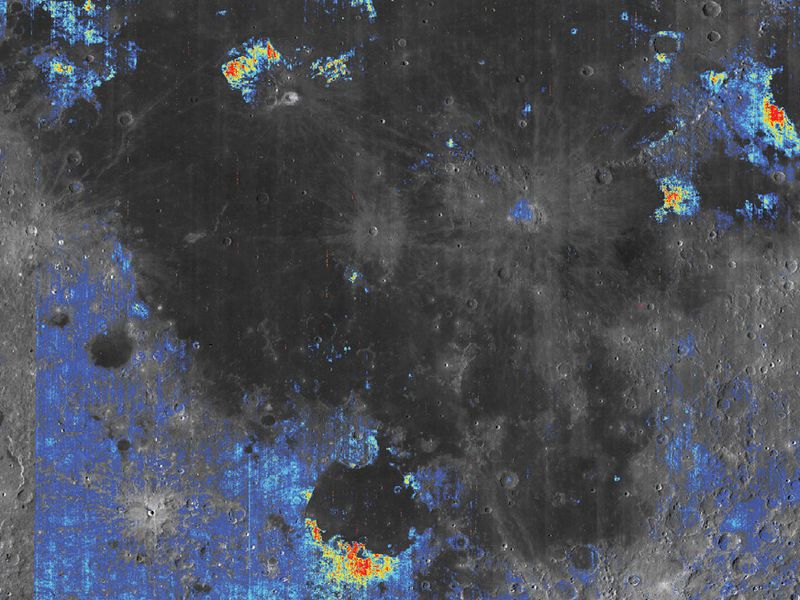 For a long time, scientists didn’t think the Moon had any water, Hannah Lang writes for National Geographic. But in 2008, a study published in the journal Nature, revealed that samples of volcanic glass brought back in the 1970s during the Apollo 15 and 17 missions contained trace amounts of the stuff. Later studies continued to hint at the existence of water, but samples were spotty. Because of this, there was not enough evidence to say how common water is on our celestial buddy and whether most of it could actually lurk beneath the crust.

So geologists turned to the rocks on the surface for clues. Like other volcanic rocks on the Moon, the watery Apollo samples were once molten material that swirled beneath the Moon’s crust. They burst onto the scene during volcanic eruptions, forming sheets across the landscape.

But the idea of sampling the entirety of the Moon’s surface is unrealistic, so geologists turned to satellite data to nail down whether the Moon is wet or dry, reports  Samantha Mathewson for Space.com. The researchers scrutinized what’s known as pyroclastic deposits, which are rocks left behind by explosive volcanoes. They detail their results in a study published in the journal Nature Geoscience.

Researchers studied the volcanic rocks in satellite images of the Moon, pinpointing wavelengths that would be emitted when light reflects off of water molecules, reports Mathewson. They also reexamined the Apollo rocks to determine how much water they contained. By combining these results, they could estimate how much water was in these regions.

“Our work shows that nearly all of the large pyroclastic deposits also contain water, so this seems to be a common characteristic of magmas that come from the deep lunar interior,” geologist Ralph Milliken told Mathewson. “That is, most of the mantle of the Moon may be ‘wet.'”

This finding could reshape the theory of how the Moon was formed, Alison Klesman writes for Astronomy magazine. Scientists previously thought that the collision that formed the Moon would have been hot enough to destroy all hydrogen in the debris that eventually condensed into the shiny orb. But the presence of water suggests it had to have been cooler. Alternatively, asteroids could have brought water to the orb later on.

On the more practical side, this discovery could give a boost to potential human exploration and settlement of the Moon in the future, reports Abigail Beall for Wired. “Water is heavy and expensive to carry with you from Earth,” Milliken tells Beall, “so any water that can be extracted at the lunar surface is a huge help for developing a sustained presence beyond Earth.”

In the future, Mathewson reports, researcher plan to continue create more detailed maps of pyroclastic deposits to further refine our understanding of how water varies across the surface of our celestial buddy.