Water hidden in the Moon may have proto-Earth origin 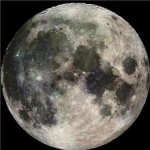 Earth’s Moon, as imaged by the Galileo mission.

Water found in ancient Moon rocks might have actually originated from the proto-Earth and even survived the Moon-forming event. Latest research into the amount of water within lunar rocks returned during the Apollo missions is being presented by Jessica Barnes at the European Planetary Science Congress in London on Monday 9th September.

The Moon, including its interior, is believed to be much wetter than was envisaged during the Apollo era. The study by Barnes and colleagues at The Open University, UK, investigated the amount of water present in the mineral apatite, a calcium phosphate mineral found in samples of the ancient lunar crust.

“These are some of the oldest rocks we have from the Moon and are much older than the oldest rocks found on Earth. The antiquity of these rocks make them the most appropriate samples for trying to understand the water content of the Moon soon after it formed about 4.5 billion years ago and for unravelling where in the Solar System that water came from,” Barnes explains.

Barnes and her colleagues have found that the ancient lunar rocks contain appreciable amounts of water locked into the crystal structure of apatite. They also measured the hydrogen isotopic signature of the water in these lunar rocks to identify the potential source(s) for the water.

“The water locked into the mineral apatite in the Moon rocks studied has an isotopic signature very similar to that of the Earth and some carbonaceous chondrite meteorites,” says Barnes. “The remarkable consistency between the hydrogen composition of lunar samples and water-reservoirs of the Earth strongly suggests that there is a common origin for water in the Earth-Moon system.”

This research has been funded by the UK Science and Technologies Facilities Council (STFC).