Not long after NASA’s Cassini orbiter first reached Saturn in mid-2004, it found something spectacular. This was our first good look at the ringed giant since the Voyager mission in the 1980s. And Cassini saw that one of Saturn’s moons, Enceladus, was venting something into space. 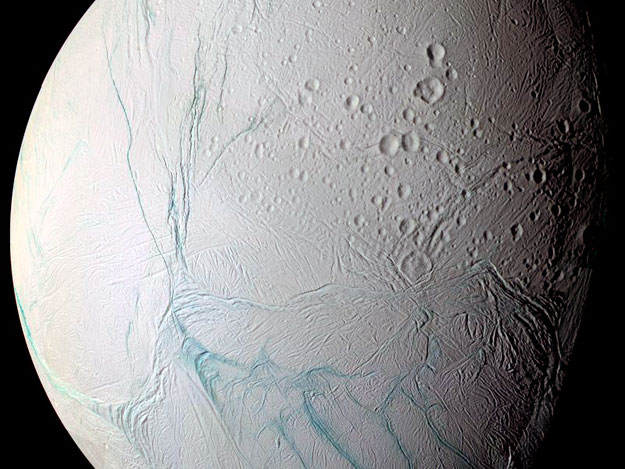 Research went on to show that Enceladus’ mighty plumes, which can shoot up to 50 miles high, were mostly water—like a giant Old Faithful, pumping into space. The plumes were not only water, though, says science writer Matthew Francis. They contain other intriguing chemicals, like methane, carbon dioxide, nitrogen and other more complex carbon molecules. “While hydrocarbons are pollutants on Earth (which create that lovely yellow smog over our cities), they also are naturally-occurring compounds that may have played a role in the early biochemistry of life on Earth,” Francis writes.

This discovery, of Enceladus’ plumes and of their resemblance to the early goo in which life on Earth is thought to have arisen, was a tantalizing find.

There was a big piece of the puzzle, though, that was still missing. The water venting into space needs to come from somewhere. Enceladus is wrapped in a thick icy shell, but researchers suspected that there was something else—a liquid water ocean, trapped underneath. According to NASA, researchers have just found such an ocean.

The new data provide the first geophysical measurements of the internal structure of Enceladus, consistent with the existence of a hidden ocean inside the moon.

…The gravity measurements suggest a large, possibly regional, ocean about 6 miles (10 kilometers) deep, beneath an ice shell about 19 to 25 miles (30 to 40 kilometers) thick. The subsurface ocean evidence supports the inclusion of Enceladus among the most likely places in our solar system to host microbial life.
The lake, says New Scientist, would be about as big as Lake Superior, one of the Great Lakes.

Enceladus, a frigid, tiny moon orbiting far from the Sun, seems like an unlikely place to find life. But then again, so does a cold lake buried beneath miles of Antarctic glacier ice. Yet when researchers drilled their way down into subglacial Lake Vostok, life is what they found. If life can survive in the depths of Antarctica, then, theoretically, it could make it in a subglacial lake on Enceladus, too.