This Device Collects Water From the Clouds

On a dry, rocky slope of Mount Boutmezguida in southwest Morocco, a series of mesh billboards stand perched among the scrubby vegetation. Anchored with thick cables and framed with steel poles, they provide a life-giving element that people in many parts of the world take for granted: water. 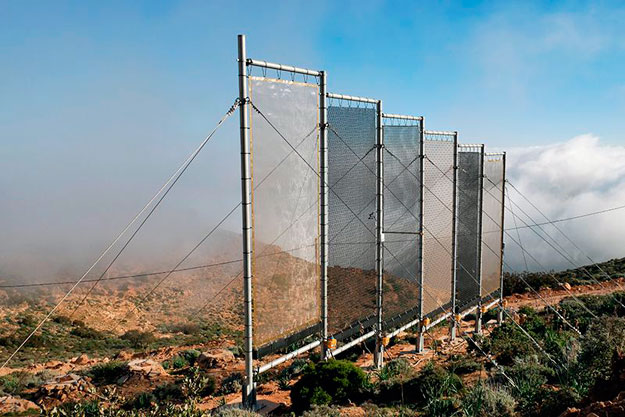 Mesh billboards on the Moroccan mountainside will soon be joined by numerous others a planned 31 in all to create the world’s largest fog collection facility.

People living in regions where water is scarce spend hours each day tracking it down from sources that are often severely contaminated. UN-Water, the United Nations’ water agency, estimates that by 2025, 1.8 billion people will be impacted by water scarcity a similar number of people currently rely on water that is faecally contaminated. And this reality disproportionately affects women, who in many regions are tasked with finding water; girls are pulled out of school to complete the job.

But despite the lack of rain in many coastal regions Chile, Eritrea, Morocco clouds of fog frequently shroud the landscape. And clouds mean water.

Harvesting this fog is far from new. Accounts of the Ferro “rain tree” in the Canary Islands that collected fog or mist on its leaves stretch back hundreds of years. In recent decades, however, researchers have tirelessly worked to improve collection technologies.

CloudFisher is one of the latest fog-catching devices, billed as the most rugged available. Those lonesome mesh billboards on the Moroccan mountainside will soon be joined by numerous others a planned 31 in all to create the world’s largest fog collection facility. The project is an international collaboration between the Moroccan NGO Dar Si Hmad and several German organizations, including CloudFisher’s parent company Aqualonis. By mid-2018, after five years of work, the cluster of mesh billboards will cover a total of 1,700 square meters just over three football fields in area. 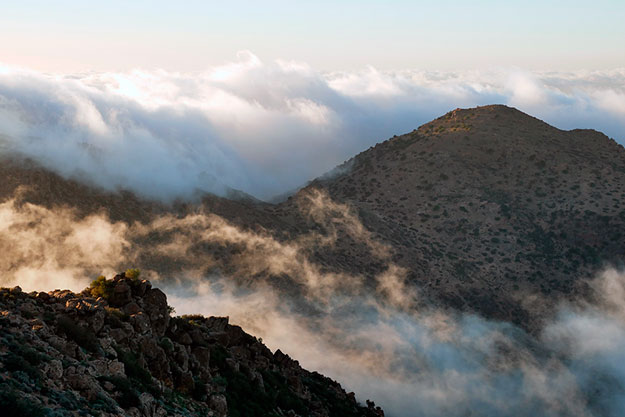 Once the Moroccan installation is complete, Aqualonis estimates the system will produce roughly 37,400 liters of water per foggy day.

Depending on the region and the time of year, the CloudFisher’s daily water harvest has been between six and 22 liters per square meter of mesh, according to Aqualonis’ website. In Morocco, they are expected to net the high end of that range. Once the Moroccan installation is complete, Aqualonis estimates the system will produce roughly 37,400 liters of water per foggy day.

“That’s a huge amount—can you imagine?” says Peter Trautwein, CEO of Aqualonis who designed CloudFisher. This total will provide each of the thousand or so inhabitants of the area around 18 liters of water per day for drinking, with leftovers used for livestock and crops. This is more than double their previous supply of eight liters per day, he says.

Though this extra water is transformative for the Moroccans in this region, it’s still a small amount to live on. To put that into perspective, Americans use an average of 300 to 400 liters of water each day.

The Canadian nonprofit FogQuest pioneered modern fog collection technology. The organization was founded in 2000 in response to rising interest in fog water. Building on the success of a Chilean test unit deployed in El Tofo in the late 1980s, the nonprofit brought fog capture into the limelight. They began educating and mentoring NGOs around the world, helping them to set up their own systems, Robert S. Schemenauer, executive director of FogQuest, explains via email.

Since that time, however, the number of competing designs has snowballed. The basic structure of most of these devices is similar: Mesh strung between poles on a rectangular stand (or cylindrical, in the case of a company called Warka Water). Minute droplets of fog condense in the tiny holes of the mesh, which glom together into drops large enough to drip down the fibers. A gutter along the bottom of the device catches the water, which is then channeled into a collection tank.

But in regions like Eritrea and Morocco, the design also has to be rugged. Gale force winds commonly sweep up the mountainsides. And the answer to the locals’ water woes has to withstand some intense pressure.

In many parts of the world, fog collectors act more like sails than mesh, explains Trautwein. Though some wind is necessary to drive the fog through the holes, gusts of wind common on the Moroccan landscape cause the panels to bow in the breeze and water to be lost. “Everything is wet apart from the trough,” he says. “You lose all the water.”

According to Trautwein, an industrial designer who now works with WasserStiftung Water Foundation, it was the struggles of early fog collectors that inspired the-rough-and-tumble features of CloudFisher. In 2013, in collaboration with the Munich Re Foundation, he and his team embarked on two years of prototype testing in the fog of Morocco’s Anti-Atlas range. What resulted was the CloudFisher design—a buttressed mesh billboard with a complicated, 3D pattern of fibers intertwined in a netting and reinforced by a thicker plastic “skeleton” grid.

This combination, Trautwein says, maximizes the amount of water collected and allows the structure to withstand winds up to 75 miles per hour. The fine mesh panel in the interior catches the fog while the thicker plastic grid prevents it from bowing in the wind. The gutter along the bottom of the device is also flexible, he says, which is a key feature for maximizing the water collected.

A thin wire along the top keeps birds from pooping on the screen and fouling the otherwise clean, drinkable water pulled from the air. Dust can attach to the screen, but as the fog begins to collect, it’s washed from the surface and separated out in a collection tank by settling. The team is currently seeking patents for the design.

With so many designs currently in development, however, competition in the field is growing.  Some designers are fiddling with coating the plastic mesh to increase yield—others have turned toward biomimicry for inspiration, imitating plants, insects and birds. But it’s difficult to say which design is truly the best, says Daniel Fernandez, researcher at California State University at Monterey Bay who studies different methods of fog collection. “There’s a lot of variables that affect the performance of the mesh,” he says.

Wind speed, wind direction and even droplet size of the fog can all affect the amount of water collected, he says. Fernandez’s paper examining the efficacy of various mesh types is currently being reviewed for publication.

Based on his analysis, however, CloudFisher is slightly in the lead. “Small fibers are better when trying to collect water, and that’s where the German mesh would maybe have an edge,” he says. But he emphasizes that the number of factors involved makes it challenging to name one mesh king.

In terms of durability, however, CloudFisher takes the crown. Now, a few years after the first complete structure was erected in Morocco, it’s still going strong, with few signs of wear and tear, according to Trautwein. On each of his trips back to the country, Trautwein snips off a little piece of the mesh to analyze. He looks for fine cracks under a microscope and tests the amount of pressure it can withstand before tearing. According to Trautwein, the fibers seem to have only degraded about three percent from their original state.

Ruggedness, however, doesn’t comes without a cost. One fog collector runs around 10,900 Euros (around $12,000), with the price decreasing to 9,000 Euros if a number of units are installed. But the system requires little upkeep, says Trautwein, which is key for long-term success in remote locations.

“If something breaks, they don’t have any spare parts,” he says. For an installation in Eritrea, he initially attempted to purchase all supplies inside the country. But, as he discovered, that could only be accomplished on the black market, where prices were sky high. And the lack of any technical support makes repairs challenging.

Trautwein believes the cost and time is worth it, and the company is growing as fast as he can find grants and establish partnerships to do the work. This year a CloudFisher installation is going up in Eritrea off the coast of the Red Sea. In November, he is heading to Tanzania to install another series of mesh billboards.

Introducing this new device, however, isn’t always easy. In Morocco, the locals were concerned that water from the clouds contained no minerals, which they believed made it unfit for consumption. Though lab tests showed that traces of minerals are present, they were unconvinced of the water’s safety.

“We also analyzed the well water,” says Trautwein. “This water is not clean, but it is very hard to explain that to people.” As a compromise they now mix the clean fog water with the contaminated (but mineral-rich) groundwater, diluting the pollutants enough to make the resulting mix safe to drink.

Installing the devices has been a constant learning process for the German team—but also for the Moroccans. Trautwein takes his role as teacher, educating people about the system, seriously. “So people get to know the system, know how to deal with it, feel proud of their work, feel independent,” he says.

“When I leave after two or three weeks, they will tell me: ’We understand the system; we don’t need you anymore,” he says before adding, “and that’s perfect.”