Even as you read this message, Japan continues to grapple with the aftermath of the deadly March 11 tsunami. Japan’s susceptibility to earthquakes have been widely discussed ever since. Less discussed has been its unique resilience-building strategy. Relatively mild tsunamis/ earthquakes hit the island-nation frequently. 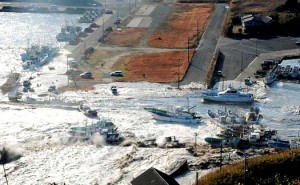 With each one, it built upon its intricate disaster risk reduction system comprising of barriers, embankments, dams, early warning systems, satellites, standard building codes and awareness-building. The video Disaster Reduction: Japan’s Global Contribution attempts an outline. There is as much to learn from Japan’s remarkable resilience as its unfortunate plight.

We cannot face disasters merely with ex-post strategies based on relief/ rehabilitation. Our approach has to be multi-dimensional, integrating disaster-preparedness with mitigation and early warning. And a socio-political understanding of disasters should inform technological measures. The following videos highlight some of these aspects:

· Bangladesh: Sisters on the Planet

· Myths and Realities of Natural Disasters

Getting Ready for the Floods Warm Regards, TheWaterChannel Team