The Pacific Institute Analysis for the United Nations recommends coping methods for growing supply and demand gaps of transboundary rivers and aquifers. 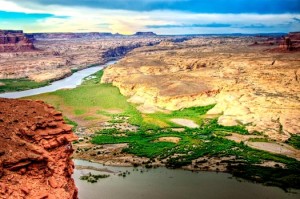 By Steve Kellman
Circle of Blue

A new analysis from the Pacific Institute finds that climate change and its effect on freshwater supplies may lead to more cross-border conflicts over shared water resources if countries don’t start preparing now.

The analysis, conducted by the California-based research institute and the United Nations Environment Programme, echoes recent Circle of Blue reports on shared freshwater resources serving as a flashpoint for international conflicts. As climate change alters patterns of water supply and demand, as well as flood and drought, existing water agreements may no longer apply as new disputes arise.

Heather Cooley, a senior research associate with the Pacific Institute and one of the report’s authors, told Circle of Blue that for decades researchers have said that change pressures aggravate water tensions, even between governments that already have agreements in place.

“There have been some efforts to try to evaluate the impacts of climate change, look at shortage requirements within these agreements … but nowhere near what needs to be done to address these risks,” Cooley said in a phone interview.

The Pacific Institute report describes ways in which several countries are now grappling with cross-border disputes — some more successfully than others — and ways in which their experiences can serve as a model for others.

“This could be used as an impetus for even greater cooperation and the development of adaptation strategies,” she said. “With different countries operating dams and reservoirs along these waterways, it’s very important that they coordinate their efforts. … As we point out, it’s best to try to do that before there’s an issue.”

One country’s promise; another country’s threat
As Circle of Blue has recently documented, water is often at the center of international disputes.

Turkey’s plan to build a series of dams and hydroelectric projects on the Tigris River is drawing protests from downstream countries including Syria and Iraq, which fear the project will give Turkey too much control over the headwaters of the Tigris and Euphrates rivers. Six nations depend on the two rivers, according to the Pacific Institute report.

Shared rivers are also the flashpoint for disputes between India and Bangladesh, with Bangladeshi leaders pressing their Indian counterparts for new agreements on the Teesta River and other waterways. A proposed dam on India’s portion of the Barak River, which environmental experts claim may dry up two downstream rivers, has drawn public concern, and protest threats. The two countries share deep freshwater links — they have 54 rivers in common, including the massive Ganges-Brahmaputra basin.

In the war-torn nation of Sudan, as special Circle of Blue correspondent Dr. Paul J. Sullivan reported, water is at the heart of many internal and external conflicts. Sudan is one of 13 countries that depend on the Congo/Zaire River for at least part of its freshwater needs, the Pacific Institute report found.

The Nile River also supplies part of Sudan, and the Pacific Institute report notes that the Nile Basin Treaty governing use of the river was negotiated between Egypt and the Sudan alone, though nine other nations are located upstream. Disagreements over water allocations have stalled a more comprehensive treaty, as we reported in December.

Colorado: A ‘Model for Other Agreements’
One of the case studies in the Pacific Institute report illustrates how states and nations can come to agreement on water issues, even in the face of changing conditions. The Colorado River, which runs more than 1,400 miles (2,300 km) from its headwaters in the Rocky Mountains to the Gulf of California, helps irrigate nearly 3 million acres (12,000 km2) of farmland and meet the water needs of 27 million residents in Las Vegas, Los Angeles, Mexicali, Phoenix, San Diego and Tijuana.

The question of who has rights to how much of the river’s water is governed by a thicket of regulations, interstate compacts, agreements, compacts and judicial decisions, known collectively as the “Law of the River.” While past cross-border discussions have been acrimonious, a recent round of negotiations in the face of the worst drought in over 100 years has resulted in a new agreement that sets specific “triggers” for when allocations should change depending on changing reservoir levels.

“There are a number of safeguards that have been put in place to deal with variable flow and water quality,” Cooley said. “Also, they have an amendment process that does provide some flexibility and could be a model for other agreements.”

For example, a drop in the water level of Lake Mead would trigger an automatic reduction in water allocations for downstream communities. This level of specificity is different from many other water treaties that set vague conditions — or no conditions at all — for how water allocations should change in periods of drought, Cooley said.

A flexible agreement will be critical in future years, as a recent study suggests that the Colorado River basin will see a reduction in runoff of between six and 20 percent by 2050, even as rising temperatures and decreasing rainfall amounts increase irrigation needs among the regions farmers. Population growth will also place even more demand on the declining resource, according to the report.

The Pacific Institute report offers a series of strategies for nations facing similar challenges. They include establishing existing water agreements and expanding existing agreements; enforcing an effective international legal framework like the UN Convention on the Law of the Non-Navigational Uses of International Watercourses; evaluating existing treaties and agreements to assess flexibility in light of changing conditions; establishing joint monitoring programs; and conducting climate impact, vulnerability, and adaptation assessments.

Sources: The Pacific Institute, Understanding and Reducing the Risks of Climate Change for Transboundary Waters (PDF)