Have you ever experienced a “water failure”? That is, have you ever turned on your faucet and found that no water came out of it? If you get your water from a municipal water system, the answer is probably “no.”

We have power failures all the time. Cable TV goes out fairly frequently. Although less common, the phone system goes down every so often, and it is now common to get an “all circuits busy” message when making long-distance calls. But the water in any city or suburb is always there. Water pressure is very reliable.

A big reason for that level of reliability is the water tower. You see water towers everywhere, especially if you live in a flat area full of small towns. Each water system has one or more towers. In this article, we will look at how water towers work. The next time you drive by a water tower, you will know exactly what it is doing.

A water tower is an incredibly simple device. Although water towers come in all shapes and sizes, they all do the same thing: A water tower is simply a large, elevated tank of water. For example, take the water tower shown at the right. This tower is located in Kill Devils Hill, near Kitty Hawk, NC. It is about 165 feet (50 meters) tall.

Water towers are tall to provide pressure. Each foot of height provides 0.43 PSI (pounds per square Inch) of pressure. A typical municipal water supply runs at between 50 and 100 PSI (major appliances require at least 20 to 30 PSI). The water tower must be tall enough to supply that level of pressure to all of the houses and businesses in the area of the tower. So water towers are typically located on high ground, and they are tall enough to provide the necessary pressure. In hilly regions, a tower can sometimes be replaced by a simple tank located on the highest hill in the area.

One of the big advantages of a water tower is that it lets a municipality size its pumps for average rather than peak demand. That can save a community a lot of money.

In most towns, the water people drink comes from either a well, a river or a reservoir (normally a local lake). The water is treated in a water treatment plant to remove sediment (by filtration and/or settling) and bacteria (typically with ozone, ultraviolet light and chlorine). The output from the water treatment plant is clear, germ-free water. A high-lift pump pressurizes the water and sends it to the water system’s primary feeder pipes. The water tower is attached to the primary feeders quite simply, as shown in this diagram: 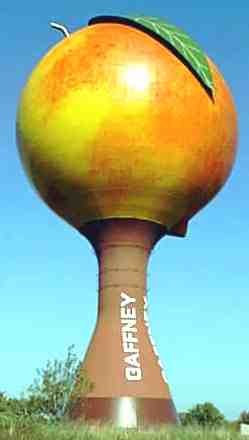 This water tower comes complete with leaf, stem and that funny crease that peaches have.

Water towers come in all shapes and sizes. Take, for example, this giant peach along I-85 in Gaffney, South Carolina.

Water towers on top of buildings are a common feature in many cities.

In a city, tall buildings often need to solve their own water pressure problems. Because the buildings are so tall, they often exceed the height that the city’s water pressure can handle. So a tall building will have its own pumps and its own water towers. In the following picture, taken from the Empire State Building in New York City, there are at least 30 small water towers visible on the tops of these buildings.

Another interesting fact about water towers — they can affect your insurance rates! During a fire, the water demand increases significantly and may greatly exceed the capacity of the pumps at the water plant. 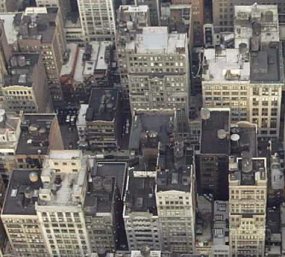 Water towers on top of buildings are a common feature in many cities.

A water tower guarantees that there will be enough pressure to keep water flowing through the fire hydrants. Fire insurance rates are normally lower in a community in which the water system has water towers.

The next time you are out driving around, especially if you are driving through a series of small towns, take the time to notice the water towers. Now that you know how they work, you will be amazed by how many you see and by all the different forms they take!