Complex relationships exist between water and the security of individuals, communities, nations, and the global community as a whole. The vital role of water in daily life and economic activity underscores its importance to a secure and stable world. Water resources and the provision of water services involve political decision-making, and extreme types of conflict can escalate into violence, terrorism, or war. 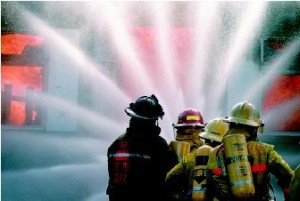 Gleick (2000) provides a timeline of water conflicts throughout history, categorizing them according to the basis of the conflict and the actors involved.

Military and terrorist actions are of particular concern to security experts and those who are responsible for managing water resources and water systems.
Military Actions

Concerns over the potential for water-related military and terrorist action are not new. For example, in 1941, J. Edgar Hoover, director of the Federal Bureau of Investigation, wrote that “water supply facilities offer a particularly vulnerable point of attack to the foreign agent . . . . ” The end of the Cold War served to heighten concern for the nation’s critical infrastructure , given its importance to national security interests.

Terrorists undertake extreme actions to achieve their political goals. The number of terrorist-type groups is growing and their methods are becoming more extreme. The terrorist potential in a globalized world was starkly illustrated by the September 11, 2001 attack on the World Trade Center in New York and the Pentagon in Washington, D.C.

Environmental terrorism is a concern to the government as it can potentially have even more significant consequences than conventional terrorism, and it can be carried out with conventional weapons (as opposed to weapons of mass destruction). The potential for disrupting society and causing human deaths is substantial. Directing conventional weapons against environmental targets can cause greater human health and economic damages with lower risks to those carrying them out. As environmental scarcities increase, the potential for damage to natural resources takes on even greater importance.

Water resources and water systems are viewed as targets for terrorist attacks for the same reasons they are targets during periods of war. Water resources are a prime infrastructure target for destruction or compromise by terrorist acts. For example, terrorists could attempt to blow up a dam to flood a particular area. The psychological impact of such an act would be very great. However, it would take a very concerted effort to blow up a large dam.

With a relatively small explosive device, terrorists would not be able to cause significant structural damage to an entire dam. However, they could target the spillway gates to cause significant flooding downstream, or try to flood the dam itself to interrupt power generation. Pumping stations could also be targeted. Loss of flow and pressure would not only affect water customers, but wreak havoc with firefighting abilities as well. Chlorine containers, used in water treatment processes, could also be targeted. Another concern is if terrorists were able to rapidly open or close major valves—an action that would result in numerous main breaks throughout the system.

Backflow also is a serious concern. A public water system has relatively unprotected access to the distribution system at certain locations. Given sufficient understanding of water systems, a terrorist could distribute toxic chemicals throughout a neighborhood or pressure zone without detection in most places. These potential actions would rival natural disasters in the stresses they would place on those responsible for the systems and those receiving services from them.

Using water resources and water systems as targets can potentially disrupt the availability and delivery of water. This is a credible threat in today’s world. In 1999, for example, engineers in Pretoria, South Africa discovered a homemade bomb in a water reservoir that was of sufficient size to damage the dam; fortunately, the bomb malfunctioned.

Hydroelectric dams and associated facilities may become a target of terrorists or combatants. These turbines inside the Bonneville Dam powerhouse on the Columbia River represent large-scale power generation afforded by large dams and major rivers worldwide. Smaller-scale hydropower facilities similarly are at risk.

Given potential risks, generalized fears are present in the public over such events. This fear was demonstrated in 2000 when a disaster preparedness drill in California almost set off a mass panic throughout the state. The drill simulated the destruction of the Lake Nacimento Dam in central California, and the mass media had to be called in to counter the resulting widespread panic.

Water as a Tool

Water can also be used as a tool or weapon of terrorism. Because it is fluid, water can be used as a delivery vehicle to carry destructive agents throughout the ecosystem, water system, and to human and animal populations. Destructive agents could include microbiological agents—bioterrorism—or toxic chemicals.

For example, terrorists could drop a concentrated water-soluble contaminant, chemical or biological, near an intake pipe. In the best-case scenario, the contaminant would be detected as it entered the water treatment plant. The plant would be shut down while the contaminant was neutralized, and potable water service to the area would be interrupted temporarily. In the worst-case scenario, the contaminant would go undetected and would affect the health of water users, and potentially cause significant health and economic damages. Rivers and water supply reservoirs are particularly vulnerable to this type of contamination attack.

Society also has seen the damages caused by nonterrorist occurrences involving microorganisms. The 1993 Cryptosporidium outbreak in Milwaukee, Wisconsin killed over a hundred people, affected some 400,000 more, and was estimated to have caused over $37 million in lost wages and productivity. A larger city with a larger water system could have incurred much greater human and economic losses. 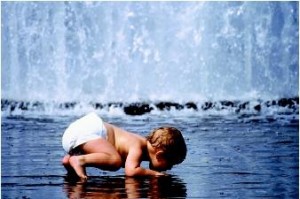 Water is not only a backdrop for security issues, but also a central factor for human health and survival. Infants and children, particularly in developing countries, are especially vulnerable to health risks posed by water scarcity and water contamination. Governments are accelerating their efforts to protect water systems, and hence their citizens, from strategic attacks.

Although attack by aerosol contamination is considered the most serious terrorist threat, the possibility of waterborne contamination is increasingly feared. The Centers for Disease Control lists the following as Category A biological agents of high concern: smallpox, anthrax, botulinum toxin, tularemia, and hemorrhagic fever viruses. Under certain circumstances, these biological agents and toxic chemicals could be considered as weapons of mass destruction.
Countering Attacks

Experts view the physical destruction of a water system’s components as increasingly more likely than contamination events because explosives are relatively easier to obtain than sufficient quantities of contaminants. Due to these potential terrorist threats, resource managers and security officials are undertaking new ways of protecting natural resources and deterring terrorism.

Even prior to the events of September 11, 2001, the security aspects of water resources and water systems were a national priority. In 1998, President’s Decision Directive 63 established the National Infrastructure Protection Center, and made the U.S. Environmental Protection Agency the lead agency responsible for the water-supply sector. Large public and privately owned water utilities are required to undergo vulnerability assessments to evaluate their risks and vulnerabilities to terrorist attacks and efforts to prevent them.

A national Critical Infrastructure Protection Advisory Group began meeting early in 2001 and set up an Information Sharing and Assistance Center to coordinate threat information. Congress has allocated funds to support counterterrorism efforts in the states and at drinking water and wastewater utilities. The Environmental Protection Agency has disseminated information on strategies for large, medium, and small utilities to counter terrorism. Training is being offered in cooperation with research centers and associations to educate utility officials in conducting their vulnerability and risk assessments. These efforts will put procedures into place that will help prevent, assess, and respond to attacks, as is done with natural disaster-preparedness planning. These counterterrorism efforts are vital to the future security of water systems and water supplies.