Forgot to water that plant on your desk again? It may soon be able to send out an SOS.

MIT engineers have created sensors that can be printed onto plant leaves and reveal when the plants are experiencing a water shortage. This kind of technology could not only save neglected houseplants but, more importantly, give farmers an early warning when their crops are in danger, says Michael Strano, the Carbon P. Dubbs Professor of Chemical Engineering at MIT and the senior author of the new study. 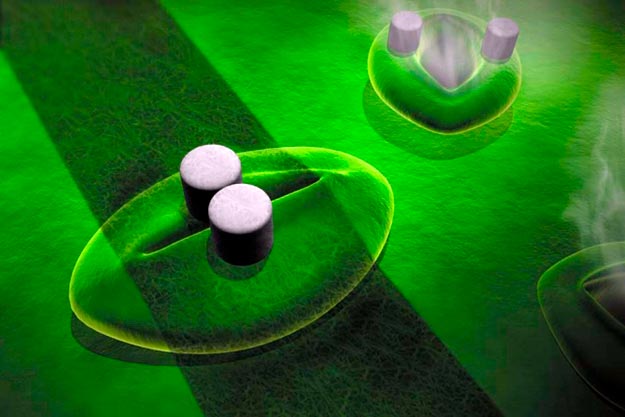 “This appears to be the earliest indicator of drought that we have for agricultural applications,” Strano says. “It’s hard to get this information any other way. You can put sensors into the soil, or you can do satellite imaging and mapping, but you never really know what a particular plant is detecting as the water potential.”

Strano has already begun working with a large agricultural producer to develop these sensors for use on crops, and he believes that the technology could also be useful to gardeners and urban farmers. It may also help researchers develop new ways to engineer drought-resistant plants, he says.

Volodymyr Koman, an MIT postdoc, is the lead author of the paper, which appears in the Nov. 8 online edition of the journal Lab on a Chip.

When soil dries out, plants slow down their growth, reduce photosynthetic activity, and suffer damage to their tissues. Some plants begin to wilt, but others show no visible signs of trouble until they have already experienced significant harm.

The new MIT sensor takes advantage of plants’ stomata — small pores in the surface of a leaf that allow water to evaporate. As water evaporates from the leaf, water pressure in the plant falls, allowing it to draw water up from the soil through a process called transpiration.

Plant biologists know that stomata open when exposed to light and close in darkness, but the dynamics of this opening and closing have been little studied because there hasn’t been a good way to directly measure them in real time.

“People already knew that stomata respond to light, to carbon dioxide concentration, to drought, but now we have been able to monitor it continuously,” Koman says. “Previous methods were unable to produce this kind of information.”

To create their sensor, the MIT researchers used an ink made of carbon nanotubes — tiny hollow tubes of carbon that conduct electricity — dissolved in an organic compound called sodium dodecyl sulfate, which does not damage the stomata. This ink can be printed across a pore to create an electronic circuit. When the pore is closed, the circuit is intact and the current can be measured by connecting the circuit to a device called a multimeter. When the pore opens, the circuit is broken and the current stops flowing, allowing the researchers to measure, very precisely, when a single pore is open or closed.

By measuring this opening and closing over a few days, under normal and dry conditions, the researchers found that they can detect, within two days, when a plant is experiencing water stress. They found that it takes stomata about seven minutes to open after light exposure and 53 minutes to close when darkness falls, but these responses change during dry conditions. When the plants are deprived of water, the researchers found that stomata take an average of 25 minutes to open, while the amount of time for the stomata to close falls to 45 minutes.

For this study, the researchers tested the sensors on a plant called the peace lily, which they chose in part because it has large stomata. To apply the ink to the leaves, the researchers created a printing mold with a microfluidic channel. When the mold is placed on a leaf, ink flowing through the channel is deposited onto the leaf surface.

The MIT team is now working on a new way to apply the electronic circuits by simply placing a sticker on the leaf surface. In addition to large-scale agricultural producers, gardeners and urban farmers may be interested in such a device, the researchers propose.

“It could have big implications for farming, especially with climate change, where you will have water shortages and changes in environmental temperatures,” Koman says.

In related work, Strano’s lab is exploring the possibility of creating arrays of these sensors that could be used to detect light and capture images, much like a camera.