In the future there will be more rain, but less water, in the Nile Basin

The Nile – the world’s longest river – runs through 11 countries in Africa and has a basin that covers about 3 million sq kms, nearly 10% of the continent’s landmass. About 250 million people are reliant on the Nile’s waters in Ethiopia, Uganda, South Sudan, Sudan and Egypt. 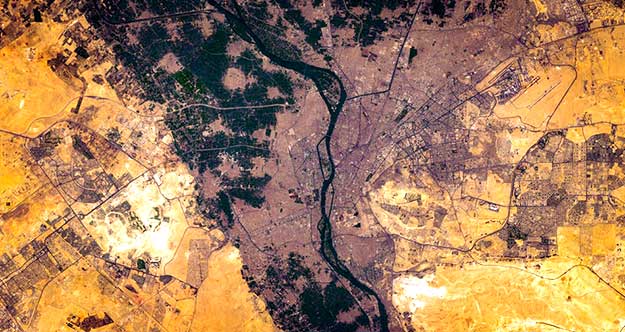 Nearly all of the rainfall that feeds the Nile’s two major tributaries – the Blue and White Nile – falls in the upper Nile basin, found in South Sudan, western Ethiopia and Uganda. The lower Nile basin receives very little rainfall and the countries there – Sudan and Egypt – depend heavily on the Nile for water.

These conditions will occur simultaneously with the region’s rapid population growth, anticipated to double by the middle of this century. This will increase water stress in the region, irrespective of the modest rainfall increases.

At present, around 10% of the basin’s population faces chronic water scarcity due to the region’s seasonal aridity and the highly unequal distribution of water resources. By 2040, according to our research – in a year with average temperatures and rain – the number of people facing water scarcity could reach 35%. That’s more than 80 million people without enough water to function in their daily lives.

Hot and dry conditions will make this worse. These conditions will kill crops, reduce hydropower, diminish the water available for people and industry and heighten tensions over the distribution of regional water resources. By 2040, a hot and dry year could push over 45% of the people in the Nile Basin – nearly 110 million people – into water scarcity.

Even without these developments, population growth would drive water scarcity in the Upper Nile. But larger deficits in the amount of water flowing into streams and rivers during future hot and dry years will amplify this effect. This will leave an additional 5% to 15% of the future population in the Upper Nile basin facing water scarcity in hot and dry years.

These climate and population changes will project onto an already complex and tense socioeconomic and political landscape.

The Nile’s 11 riparian states vie with one another for the river’s water. The downstream states of Egypt and Sudan try to assert control over the Nile flow, while upstream states try to find ways to secure water for their well-being. Coupled with the region’s strong dependence on subsistence agriculture and political instability, the region is at risk of severe food and water shortages.

For our research, we wanted to understand how much more frequent hot and dry years could become, despite the slight increase in overall rainfall.

To do this we assessed historical climate trends in the Upper Nile Basin using eight observational data sets. These recorded rainfall and temperature in the Upper Nile basin between 1961 and 2005. We also used climate models to estimate how temperature and precipitation will change over the remaining century.

Our findings show that hot and dry years have become more common over the past four decades in the Upper Nile basin and that this trend is likely to continue. These hot and dry conditions will be similar to those that have resulted in crop failures, food shortages and humanitarian crises in the region over the past decades.

In addition to becoming more frequent, they will also become more severe. Temperatures during heat waves in the region could rise between 2°C and 6°C, putting far more stress on people, animals and crops than occurs today.

We estimated the number of people facing water scarcity by comparing the total runoff – the amount of water flowing into streams and rivers – which is available for human consumption with the amount of water every person needs to meet their basic needs. When we make this comparison, we find that despite the small projected increase in rainfall, as the population rises and hot and dry years become more frequent, the total water supply will be far less than needed to meet the region’s needs.

What’s causing all this?

Like the rest of the world, the Nile Basin region has been warming due to rising global greenhouse gas concentrations. Because rainfall is projected to slightly increase in the region, the frequency of dry years won’t change significantly. However, the rise in temperature means that when dry years happen, they will be hot.

Compounding this drying is a projected increase in the year-to-year variations in rainfall, which may be due to projected intensification of El Niño and La Niña cycles. This creates a precipitation “whiplash” in the region, where severe wet and dry years occur in quick succession.

What can be done

One critical priority is to ensure that food and water are more equally available to all. Despite there being enough food and water on average, many people cannot afford or access it. This will get worse.

A critical first step is for basin states to create an equitable water allocation scheme among them that not only addresses “historical rights” – such as Egypt’s long-held claims to two-thirds of Nile flow – but also to the needs of upstream countries like South Sudan and Ethiopia, which require water to build their economies.

Cooperative water-sharing institutions within the basin could help avert contentious situations. For instance, Ethiopia is currently constructing the Grand Ethiopian Renaissance Dam on the Blue Nile River. Without strong regional institutions to provide political and legal assurances of fair Nile water use, the dam’s construction is provoking worries in Egypt, as it would likely reduce irrigation water availability for the country’s agriculture.

Water may be often pointed to as a source of conflict, but as with the case of Israel and Jordan, it can also be a means to cooperation, getting nations to the negotiating table. In a future world with more people and less water, countries in the Nile Basin will need to work together to ensure the best use of the region’s resources to catch and store rainfall in the wet, flood risk years, and equally distribute that water in dry years.

If the region’s governments fail to work together to prepare, the consequences for their people could be catastrophic.

Sorry, there are no polls available at the moment.