Stanford researchers have developed a battery that takes advantage of the difference in salinity between freshwater and seawater to produce electricity.

Anywhere freshwater enters the sea, such as river mouths or estuaries, could be potential sites for a power plant using such a battery, said Yi Cui, associate professor of materials science and engineering, who led the research team. 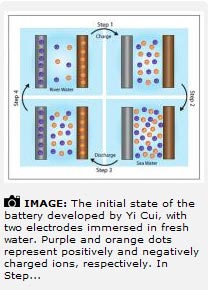 As an indicator of the battery’s potential for producing power, Cui’s team calculated that if all the world’s rivers were put to use, their batteries could supply about 2 terawatts of electricity annually – that’s roughly 13 percent of the world’s current energy consumption.

The battery itself is simple, consisting of two electrodes – one positive, one negative – immersed in a liquid containing electrically charged particles, or ions. In water, the ions are sodium and chlorine, the components of ordinary table salt.

Initially, the battery is filled with freshwater and a small electric current is applied to charge it up. The freshwater is then drained and replaced with seawater. Because seawater is salty, containing 60 to 100 times more ions than freshwater, it increases the electrical potential, or voltage, between the two electrodes. That makes it possible to reap far more electricity than the amount used to charge the battery.

“The voltage really depends on the concentration of the sodium and chlorine ions you have,” Cui said. “If you charge at low voltage in freshwater, then discharge at high voltage in sea water, that means you gain energy. You get more energy than you put in.” 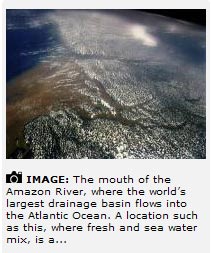 Once the discharge is complete, the seawater is drained and replaced with freshwater and the cycle can begin again. “The key thing here is that you need to exchange the electrolyte, the liquid in the battery,” Cui said. He is lead author of a study published in the journal Nano Letters earlier this month.

In their lab experiments, Cui’s team used seawater they collected from the Pacific Ocean off the California coast and freshwater from Donner Lake, high in the Sierra Nevada. They achieved 74 percent efficiency in converting the potential energy in the battery to electrical current, but Cui thinks with simple modifications, the battery could be 85 percent efficient.

To enhance efficiency, the positive electrode of the battery is made from nanorods of manganese dioxide. That increases the surface area available for interaction with the sodium ions by roughly 100 times compared with other materials. The nanorods make it possible for the sodium ions to move in and out of the electrode with ease, speeding up the process.

Other researchers have used the salinity contrast between freshwater and seawater to produce electricity, but those processes typically require ions to move through a membrane to generate current. Cui said those membranes tend to be fragile, which is a drawback. Those methods also typically make use of only one type of ion, while his battery uses both the sodium and chlorine ions to generate power. 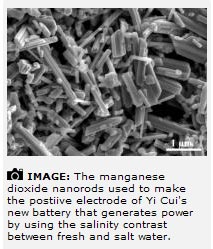 Cui’s team had the potential environmental impact of their battery in mind when they designed it. They chose manganese dioxide for the positive electrode in part because it is environmentally benign.

The group knows that river mouths and estuaries, while logical sites for their power plants, are environmentally sensitive areas.

“You would want to pick a site some distance away, miles away, from any critical habitat,” Cui said. “We don’t need to disturb the whole system, we just need to route some of the river water through our system before it reaches the ocean. We are just borrowing and returning it,” he said.

The process itself should have little environmental impact. The discharge water would be a mixture of fresh and seawater, released into an area where the two waters are already mixing, at the natural temperature.

One of Cui’s concerns is finding a good material for the negative electrode. He used silver for the experiments, but silver is too expensive to be practical.

His group did an estimate for various regions and countries and determined that South America, with the Amazon River draining a large part of the continent, has the most potential. Africa also has an abundance of rivers, as do Canada, the United States and India.

But river water doesn’t necessarily have to be the source of the freshwater, Cui said.

“The water for this method does not have to be extremely clean,” he said. Storm runoff and gray water could potentially be useable.

A power plant operating with 50 cubic meters of freshwater per second could produce up to 100 megawatts of power, according to the team’s calculations. That would be enough to provide electricity for about 100,000 households.

Cui said it is possible that even treated sewage water might work.

“I think we need to study using sewage water,” he said. “If we can use sewage water, this will sell really well.”