Biological oceanography is a field of study that seeks to understand what controls the distribution and abundance of different types of marine life, and how living organisms influence and interact with processes in the oceans. 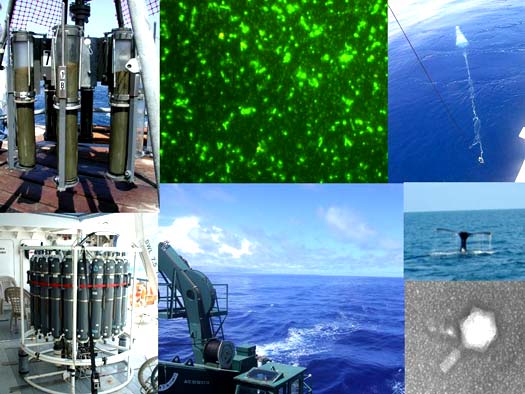 Biological oceanographers study all forms of life in the oceans, from microscopic plants and animals to fish and whales. In addition, biological oceanographers examine all forms of oceanic processes that involve living organisms. These include processes that occur at molecular scales, such as photosynthesis , respiration, and cycling of essential nutrients , to largescale processes such as effects of ocean currents on marine productivity.

A distinction is often made between the fields of biological oceanography and marine biology. Although there is considerable overlap between the two disciplines, the field of marine biology traditionally deals with the study of individual organisms, including their taxonomy, behavior, physiology and other aspects of their biology. In contrast, the emphasis of biological oceanography is the ocean and organisms as a system. As such, biological oceanographers tend to utilize a multidisciplinary approach, drawing on knowledge from various fields in addition to biology including, for example, physics, chemistry, and geology.
Tools and Technology

Biological oceanographers rely on a variety of tools and use a variety of approaches to aid them in their study of life in the sea. Some studies involve laboratory experiments with individual organisms. In other cases, the oceanographer must go into the water to directly sample and observe certain types of organisms such as zooplankton .

Other approaches involve underwater submersible vehicles to gain access to biological communities deep in the ocean, such as those associated with deep-sea hydrothermal vents. Many oceanographers use research vessels from which they lower instruments and specialized water sampling gear into the water. Biological oceanographers employ methods derived from various fields, including molecular biology, immunology, physiology, biochemistry, ecology, and many others.

This oceanography graduate student repairs a deep-water instrument in the biological research lab aboard a research vessel. Deployment of such devices allows biological oceanographers to conduct measurements at depth.
models are used to help to understand and explain an existing set of observations. Finally, some models are used to predict changes in biological processes that may occur because of natural and human-induced changes to the ocean environment.

Advances in technology have given biological oceanographers new insights about the living oceans. Lasers, fiber optics, high-speed digital video imaging and DNA microarrays are some of the high-tech “gadgets” that are used to study biological processes in the oceans. Robotic underwater vehicles reduce the risk and expense of manned submersibles while providing spectacular views of undersea communities. Other types of instruments are allowed to drift freely with ocean currents, towed behind a ship, or anchored at specific locations to provide detailed information over time and space. Among the most powerful tools available to biological oceanographers are satellite and airborne sensors, which provide large-scale views of the ocean and have greatly enriched the scientific understanding of biological processes and their relationship to physical phenomena.
Areas of Research

Other important areas of study include understanding linkages between different levels of the marine food web , from phytoplankton all the way up to fish and marine mammals. Biological oceanographers also study factors that influence biological diversity within the oceans, and the importance of diversity in maintaining biological function. Understanding and mitigating the decline in biodiversity , such as has occurred with losses of highly diverse coral reef communities, is a primary concern of biological oceanographers. Researchers also may deal with issues that affect society such as water pollution, overexploitation of fisheries, and harmful algal blooms.
Funding Sources.

Biological oceanographers compete for a limited pool of funds to do their research by submitting proposals or bidding on contracts to various scientific agencies. Research is supported by federal agencies such as the National Science Foundation, Department of Commerce, Department of Defense, National Aeronautics and Space Administration, Environmental Protection Agency, Department of Energy, Minerals Management Service, and National Research Council, as well as many other government and private agencies. Funded programs strive to advance a basic understanding of the oceans and life within, provide strategic information required for national defense, and preserve and protect the valuable resources of the oceans.