New Discovery about How Water Moves Through Soil

Researchers have discovered that some of the most fundamental assumptions about how water moves through soil in a seasonally dry climate such as the Pacific Northwest are incorrect – and that a century of research based on those assumptions will have to be reconsidered.

A new study by scientists from Oregon State University and the Environmental Protection Agency showed – much to the surprise of the researchers – that soil clings tenaciously to the first precipitation after a dry summer, and holds it so tightly that it almost never mixes with other water.

Implications of the Discovery

The finding is so significant, researchers said, that they aren’t even sure yet what it may mean. But it could affect our understanding of how pollutants move through soils, how nutrients get transported from soils to streams, how streams function and even how vegetation might respond to climate change.

The research has been published in Nature Geoscience, a professional journal, with a title of “Ecohydrologic separation of water between trees and streams in a Mediterranean climate”.

“Water in mountains such as the Cascade Range of Oregon and Washington basically exists in two separate worlds,” said Jeff McDonnell, an OSU distinguished professor and holder of the Richardson Chair in Watershed Science in the OSU College of Forestry. “We used to believe that when new precipitation entered the soil, it mixed well with other water and eventually moved to streams. We just found out that isn’t true.”

“This could have enormous implications for our understanding of watershed function,” he said. “It challenges about 100 years of conventional thinking.”

What actually happens, the study showed, is that the small pores around plant roots fill with water that gets held there until it’s eventually used up in plant transpiration back to the atmosphere. Then new water becomes available with the return of fall rains, replenishes these small localized reservoirs near the plants and repeats the process. But all the other water moving through larger pores is essentially separate and almost never intermingles with that used by plants during the dry summer. 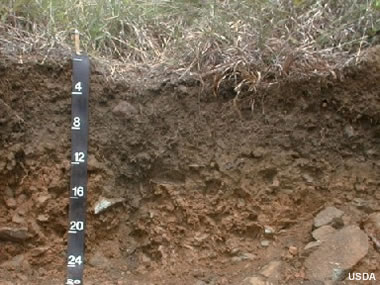 The study found in one test, for instance, that after the first large rainstorm in October, only 4 percent of the precipitation entering the soil ended up in the stream – 96 percent was taken up and held tightly by soil around plants to recharge soil moisture. A month later when soil moisture was fully recharged, 55 percent of precipitation went directly into streams. And as winter rains continue to pour moisture into the ground, almost all of the water that originally recharged the soil around plants remains held tightly in the soil – it never moves or mixes.

“This tells us that we have a less complete understanding of how water moves through soils, and is affected by them, than we thought we did,” said Renee Brooks, a research plant physiologist with the EPA and courtesy faculty in the OSU Department of Forest Ecosystems and Society.

“Our mathematical models of ecosystem function are based on certain assumptions about biological processes,” Brooks said. “This changes some of those assumptions. Among the implications is that we may have to reconsider how other things move through soils that we are interested in, such as nutrients or pollutants.”

The new findings were made possible by advances in the speed and efficiency of stable isotope analyses of water, which allowed scientists to essentially “fingerprint” water and tell where it came from and where it moved to. Never before was it possible to make so many isotopic measurements and get a better view of water origin and movement, the researchers said.

The study also points out the incredible ability of plants to take up water that is so tightly bound to the soil, with forces nothing else in nature can match.

The research was conducted in the H.J. Andrews Experimental Forest near Blue River, Ore., a part of the nation’s Long Term Ecological Research, or LTER Program. It was supported by the EPA.

About the OSU College of Forestry: For a century, the College of Forestry has been a world class center of teaching, learning and research. It offers graduate and undergraduate degree programs in sustaining ecosystems, managing forests and manufacturing wood products; conducts basic and applied research on the nature and use of forests; and operates 14,000 acres of college forests.