The use of space satellite data for ocea n observations allows marine scientists to view biological, chemical, and physical interactions within the oceans on regional and global scales. 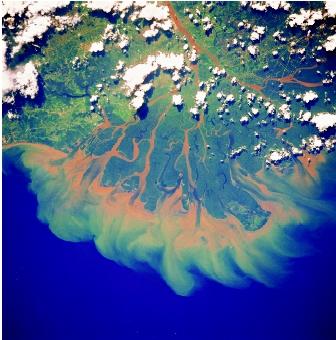 In addition, the strength of the radar signal depends on the size of the surface ripples, which are in turn related to the wind speed, allowing the wind speed to be calculated. Because currents are detectable as slopes in the sea surface, the world’s ocean currents can also be identified and monitored.

A radiometer can be used to collect surface temperature data and ocean color data. A radiometer measures the amount of the Sun’s visible light and infrared radiation reflected off the ocean. Examples of radiometers include the Coastal Zone Color Scanner (CZCS) and SeaWiFS (Sea-viewing Wide Field-of-view Sensor).

The temperature of the sea surface can be calculated using the infrared portion of the data. Because currents and water masses vary considerably in

This view from the space shuttle Columbia shows silt running into the sea from the Mahakam River in Borneo, Indonesia, and the delta that has formed as a result. The delta is the roughly triangular-shaped landmass extending from where the river branches into many distributaries, out to the coastal area. The feathery areas seaward of the delta are very fine-grained sediments that are being transported away by coastal ocean currents.
temperature, this data is particularly useful in observing currents and circulation processes.

Eddies are one feature in particular that can be identified using an infrared radiometer. These are generated by large-scale currents, such as the Gulf Stream. Eddies can affect the distribution of marine life and can last for many years before dissipating. Locating such eddies and studying their dynamics can help researchers track pollution such as oil spills and determine where marine life may be located.
Ocean Color.

Ocean color can be determined by measuring the portions of the visible spectrum reflected from the ocean surface. It can indicate a number of things to an oceanographer, such as amount of plankton and amount of vegetation. The color of the ocean changes slightly, from a bright blue to a dark blue or black when plankton float freely or concentrate in areas. These concentrations are called blooms. These colors can indicate to scientists the productivity of the oceans and potential for greater amounts of wildlife since plankton are the basis of the marine food web and without plankton all marine life would suffer.

Satellite data have become accurate and dependable enough that they is now integrated with other forms of marine data collection. In addition, satellite data provide a large-scale view of ocean dynamics that otherwise would be unavailable. What has emerged is exciting new information about vast areas of previously unstudied open water.