The more phosphorus there is in the Baltic, the more active blue-green algae are. They bloom over wide areas, consuming all the oxygen, and turning large parts of the seabed into dead zones. Fish and other living things of the Baltic Sea suffer from the heavy impact of the algae. 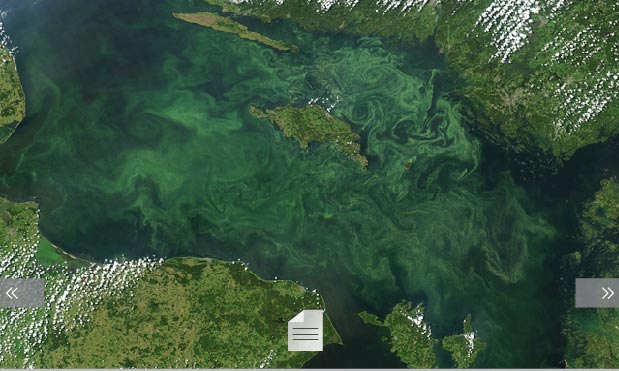 The biomass of the blue-green algae in their blooming period is shown in the figure below. For example, in August 2010, in order to export all the algae from the Gulf of Finland, one would need 200,000 fully loaded ten-ton trucks!

There is little joy for the residents of coastal towns and cities in the bloom-choked sea either. The water along the line of coastal beaches is overgrown with carex and green algae, and the water spreads the rotten odor of hydrogen sulfide resulting from the putrefaction of blue-green algae and mollusks dying from a lack of oxygen.

In the 20th century, the Baltic countries joined efforts to save the region. A special Helsinki convention was signed, and the Baltic Marine Environment Protection Commission (HELCOM) was founded. One of HELCOM’s top priorities is the reduction of phosphorus (and nitrogen) discharge into the Baltic Sea.

Over recent years, St. Petersburg has played a vital role in reducing the discharge of phosphorus. Up until 1978, there were no wastewater treatment plants in the city at all, whereas in 2011, 94% of wastewater undergoes treatment. However, reducing dumping of untreated wastewater is not enough to meet environmental protection standards. Unfortunately, traditional treatment methods do not ensure the complete removal of phosphorus from wastewater. To achieve this, modern technology must come into play. This is already being applied at treatment plants in St. Petersburg.

Sedimentation of the phosphorus is achieved using chemicals, and the treated wastewater entering the Baltic contains less than 0.5 mg of phosphorus per liter, which complies fully with HELCOM standards. Ten tons of phosphorus is removed daily from the city’s wastewater before it is dumped to the Gulf of Finland.

Over the past five years, St. Petersburg has reduced phosphorus dumping by over a thousand tons per year. Tarja Halonen, President of Finland, has stated that St. Petersburg’s advances in wastewater treatment are “a world-class achievement”.

Role of St. Petersburg in Saving the Baltic Sea

The Amount of Phosphorus St. Petersburg Dumps in the Baltic

How Can We Contribute To the Protection of the Baltic Sea?

• Do not waste more water than you need. The more water you use, the more wastewater there is to treat.
• Do not use too much detergent. Half a pack is unnecessary just to wash a couple of t-shirts.
• Buy phosphate-free detergents.
• Do not dump cigarette butts, food, bottles and other trash in bodies of water.
• Do not wash your car using water from the coast.
• Do not flush your garbage down the toilet.