For an estimated explanation of where Earth’s water exists, look at the chart below. By now, you know that the water cycle describes the movement of Earth’s water, so realize that the chart and table below represent the presence of Earth’s water at a single point in time. If you check back in a thousand or million years, no doubt these numbers will be different! 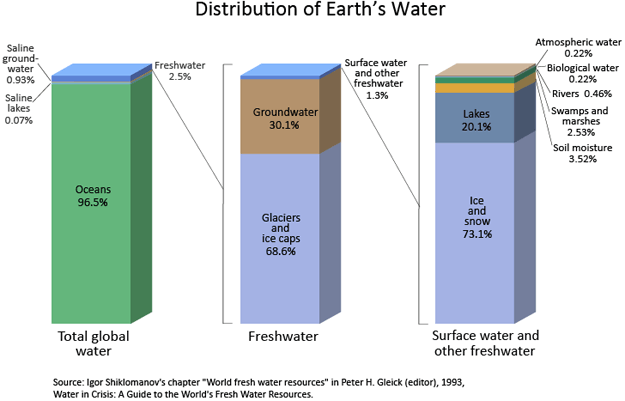 Notice how of the world’s total water supply of about 332.5 million cubic miles of water, over 96 percent is saline. And, of the total freshwater, over 68 percent is locked up in ice and glaciers.

Another 30 percent of freshwater is in the ground. Fresh surface-water sources, such as rivers and lakes, only constitute about 22,300 cubic miles (93,100 cubic kilometers), which is about 1/150th of one percent of total water. Yet, rivers and lakes are the sources of most of the water people use everyday.