Even if you’ve never heard of capillary action, it is still important in your life. Capillary action is important for moving water (and all of the things that are dissolved in it) around. It is defined as the movement of water within the spaces of a porous material due to the forces of adhesion, cohesion, and surface tension. 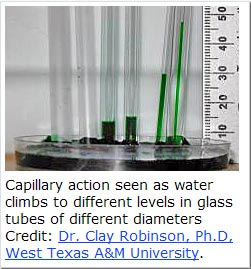 Capillary action occurs because water is sticky, thanks to the forces of cohesion (water molecules like to stay close together) and adhesion (water molecules are attracted and stick to other substances). Adhesion of water to the walls of a vessel will cause an upward force on the liquid at the edges and result in a meniscus which turns upward. The surface tension acts to hold the surface intact. Capillary action occurs when the adhesion to the walls is stronger than the cohesive forces between the liquid molecules. The height to which capillary action will take water in a uniform circular tube (picture to left) is limited by surface tension and, of course, gravity.

Not only does water tend to stick together in a drop, it sticks to glass, cloth, organic tissues, soil, and, luckily, to the fibers in a paper towel. Dip a paper towel into a glass of water and the water will “climb” onto the paper towel. In fact, it will keep going up the towel until the pull of gravity is too much for it to overcome.

Capillary action is all around us every day 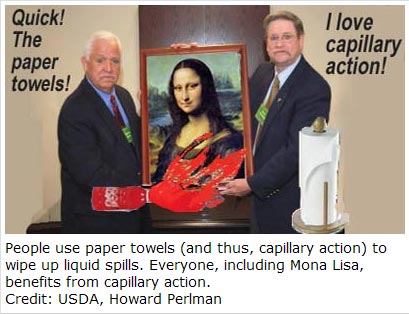 The proof is in the pudding … I mean, in the celery 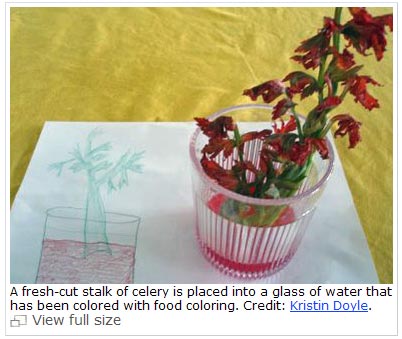 You can see capillary action in action (although slowly) by doing an experiment where you place the bottom of a celery stalk in a glass of water with food coloring and watch for the movement of the color to the top leaves of the celery. 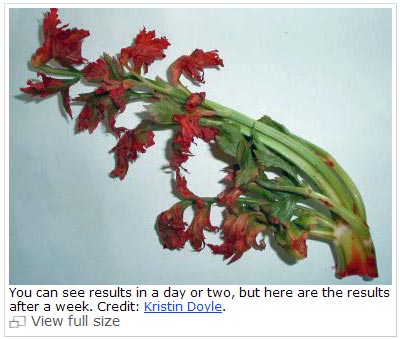 You might want to use a piece of celery that has begun to whither, as it is in need of a quick drink. It can take a few days, but, as these pictures show, the colored water is “drawn” upward, against the pull of gravity. This effect happens because, in plants, water molecules move through narrow tubes that are called capillaries (or xylem).