Four dollars for a gallon of water? The dream of Monsanto and other corporations wanting to privatize water

Four dollars for a gallon of gas is ridiculous enough, but $4 for a gallon of water could someday became a reality, that is if oil tycoons like T. Boone Pickens and water bottling companies have their way. Privatization of water in which companies control the public’s water sources and free water is a thing of the past appears to be what Pickens and corporations such as Monsanto, Royal Dutch Shell, and Nestle are banking on to increase their vast fortunes. 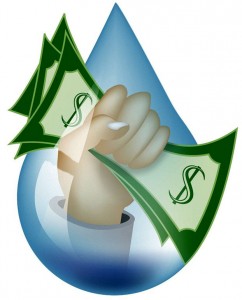 Companies, brokers and billionaires are buying up groundwater rights and aquifers. Groundwater is necessary for agriculture and more water is needed to meet a growing demand for food. Many countries have already over-pumped their groundwater to feed increasing local populations. Combine this with climate changes and an ever-increasing strain on water resources due to a rapidly growing world population and you have got a future where water is called “blue gold” because of its scarcity and high cost.

Private corporations already own 5 percent of the world’s fresh water. Australia is an excellent example of a country already suffering from multiple water droughts. Farmers are selling water rights to brokers, unaware of the long-term effects.

The United States is by no means immune to these plots. Royal Dutch Shell owns groundwater rights in Colorado and oil tycoon Pickens is buying up all he can in Texas. He owns more water than any other person in the U.S. His plan is to sell the water owns, around 65 billion gallons annually, to Dallas and other major cities affected by droughts. Pickens hopes to profit off of desperation, saying “There are people who will buy the water when they need it. And the people who have the water want to sell it. That’s the blood, guts, and feathers of the thing.” He also owns a massive wind farm in the area and natural gas resources, but has admitted that he is no environmentalist, only an entrepreneur who goes where the money is.

The public might not even be able to rely on the government to do the right thing and protect everyone from private water owners buying up all the water and then selling it for as much as people are able to pay. Lawmakers in most states did not foresee water privatization because water was once plentiful. As such, in some cases the only people who legally have a right to stop water privatization plans are the people who reside on the water property. For Pickens and his land near the Ogallala Aquifer this means that he, his wife and three of his employees are the only people who have a say in his privatization plans, according to EarthFirst.com.

The only way people can fight this despicable process is to refuse to support it. Water districts across the U.S. are refusing to purchase water from private companies. If Pickens, Monsanto and others have no one to sell the water to then they will give up. They are only in it for the money. No buyers means no profit.