Chemical water pollutants are generally atoms or molecules, which have been discharged into natural water bodies, usually by activities of humans. Common examples of such chemical water pollutants are mercury emanating from mining activity, certain nitrogen compounds used in agriculture, chlorinated organic molecules arising from sewage or water treatment plants or various acids which are the externalities of various manufacturing activities. 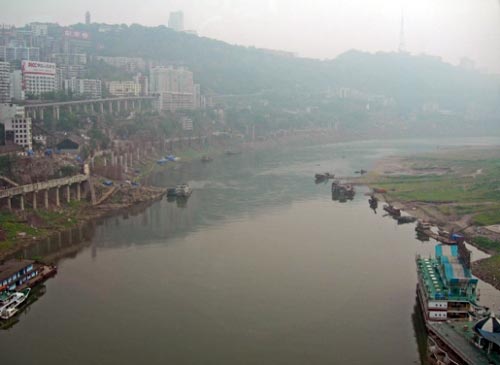 Physical water pollutants are either (a) much larger particles or (b) physical factors such as temperature change, both of which while not typically toxic, cause a variety of harmful effects.

The most obvious of physical pollutants are (a) excessive sediment load, mostly arising from over-intense land use practices and (b) rubbish discarded from human manufacturing activity (e.g. plastic bags, bottles). While these materials are not so harmful to human health as chemicals or pathogens, they comprise the majority of visual impact of water pollution. In the case of thermal pollution, these point source discharges typically affect the metabolism of aquatic fauna in adverse ways.

Radioactive substances are really merely a special sub-class of chemical pollutants, and by mass represent the smallest of the contributors to water pollution; however, their potential for harm allows recognition as a separate class. In fact, most discharge of radioactivity is not from the negligible escape from nuclear power plants, but rather arises from agricultural practices such as tobacco farming, where radioactive contamination of phosphate fertilizer is a common method of introduction of radioactive materials into the environment.

Common pathogenic microbes introduced into natural water bodies are pathogens from untreated sewage or surface runoff from intensive livestock grazing. One of the most common disease agents is Giardia lamblia, a parasitic protozoan common in fecal material of many fauna including humans; this microbe is particularly insidious, due to its resistance to conventional sewage treatment. This and other protozoans and bacteria are important causes of illness and mortality in developing countries where population density, water scarcity and inadequate sewage treatment combine to occasion widespread parasitic and bacterial disease.