Facts and figures about deserts

Deserts cover about one fifth of the Earth’s surface.

With an area of 9,100,000 km2, the Sahara is the largest desert in the world and occupies approximately 10% of the African Continent. 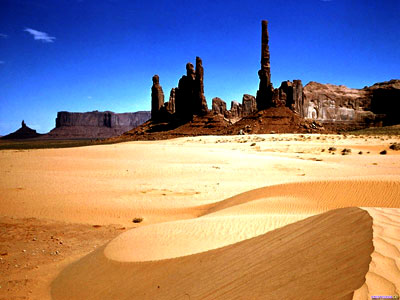 The driest desert of the world is the Atacama Desert in Chile. For the period between 1964 and 2001, the average annual rainfall at the meteorological station in Quillagua was just 0.5 mm.
Sand covers only about 20% of the Earth’s deserts. Most of the sand is in sand sheets and sand seas – vast regions of undulating dunes resembling ocean waves ‘frozen’ in an instant of time. Nearly 50% of desert surfaces are plains where eolian deflation – removal of fine-grained material by the wind – has exposed loose gravels consisting predominantly of pebbles but with occasional cobbles.

Most desert plants are drought- or salt-tolerant. Some store water in their leaves, roots, and stems. Other desert plants have long tap roots that penetrate the water table, anchor the soil, and control erosion. The stems and leaves of some plants lower the surface velocity of sand-carrying winds and protect the ground from erosion.

Dust storms are a growing problem in many areas, affecting the health of people and ecosystems both locally and at a great distance. Thick storms rising out of the Gobi Desert affect much of China, Korea and Japan, cause increased incidences of fever, coughing and sore eyes during the dry season. Dust emanating from the Sahara has been implicated in respiratory problems as far away as North America and has affected coral reefs in the Caribbean.

In the 1970s, the deserts of North Africa were moving relentlessly south, and satellite photography revealed an expanding Sahara Desert. Recent work in the Sahel has shown both that the desert is now retreating, and that enterprising farmers have improved their management of the soil so much that productivity is increasing and food production has improved beyond all expectations.

In Egypt’s deep south, along the shores of the country’s largest strategic water reserve, ambitious efforts are underway to green the desert. The government plans to resettle one million people around Lake Nasser (one of the world’s largest artificial lakes formed behind the Aswan High Dam across the Nile) by 2017. Small agricultural communities have already started sprouting up in this desolate land, but lack of basic amenities has so far been a hindering factor in this project realizing its true potential.

The Roman Empire’s breadbasket in North Africa, which once contained 600 cities, is now a desert.

Deserts are being used for fish farms. Shrimp are being grown in the high temperatures of the Arizona desert in the United States. And pilot projects in India’s desert state of Rajasthan have found its saline water – which hinders crop growth – ideal for the purpose.