Some liquid crystals form monolayers on water surface. When compressed from sides, such films of monomolecular thickness can wrinkle like fabric on a flat, smooth table, pulled together with palms simultaneously from both sides. With increasing surface pressure, the wrinkles of the monolayer fold up and form subsequent layers. The research on new compounds at the Institute of Physical Chemistry of the Polish Academy of Sciences in Warsaw has resulted in the discovery of new mechanisms of multilayer formation that are responsible for creation of liquid crystal films with a structure that has never been observed before. 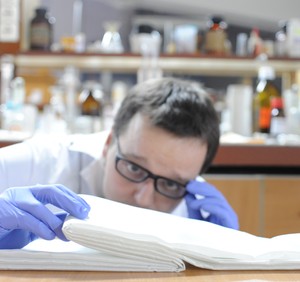 After pouring on a water surface, liquid crystals can form ordered layers of monomolecular thickness. When such layers are compressed in their plane, they can form, under appropriate conditions, a film composed of three layers — a trilayer. It was supposed that from time to time even 5-layers may be formed. “The existence of 5-layers has not, however, been well documented. We managed to confirm their presence with high precision. Moreover, we observed 9-layers that until now were considered exclusively as research suggestions,” says Dr Andrzej Żywociński from the Institute of Physical Chemistry of the Polish Academy of Sciences (IPC PAS) in Warsaw. The research findings have been published in Chemistry — A European Journal.

The researchers from IPC PAS poured microliters of liquid crystals on the surface of water. The compounds and their amounts were adjusted so as to form an ordered monomolecular layer (with a thickness of one molecule). The monolayers can be compressed with an apparatus called Langmuir trough. It is basically a trough with two hydrophilic barriers, between which a monolayer of chemical compound under study is drifting on the water surface. By reducing the distance between the barriers one can significantly increase the pressure in the monolayer plane.

The research pursued by Dr Żywociński and Prof. Robert Hołyst’s PhD students was focused on about a dozen compounds from the group of bolaamphiphiles synthesised in Prof. Carsten Tschierske’s research team from the Martin-Luther-University of Halle-Wittenberg. The molecules of these compounds have various complicated shapes, sharing a rigid core with hydrophilic (water-loving) groups attached to both ends. These groups anchor the molecule to the water surface. In addition, the central part of the core contains hydrophobic (water-hating) chains. A part of molecules studied had two hydrophobic groups in an X-shaped arrangement, another part — one such group in a T-like configuration, while in the remaining molecules the core was not straight but bent, resembling the shape of an anchor.

In molecules used in the study, hydrogen atoms in hydrophobic chains were partially replaced with fluorine atoms, which resulted in an increased rigidity and hydrophobicity. Due to the substitution, the molecules, especially those X-shaped, formed on water very stable, well ordered monolayers.

The measurements have shown that the molecules of compounds studied behave somewhat like fabric on a table (with one significant difference: a fabric is solid, and the processes described here occur only if the compound is in the liquid phase). When a monolayer is compressed from sides, the forces acting in the system displace the molecules upward, and the monolayer develops folds that subsequently roll over. If the compression is continued, an ordered structure composed of three monolayers is formed on the water surface. The process has already been described in the scientific literature.

“We were able to observe and document a much more interesting mechanism,” says Jan Paczesny, a PhD student from the IPC PAS. “It turned out that further compression of a trilayer formed by one of the compounds leads to the folding that involves not one, external monolayer, but the entire trilayer. The fold being pushed out has then a thickness of six layers and after rolling over on a trilayer, our molecular ‘fabric’ becomes an excellently ordered 9-layer.” An increase of the multilayer thickness in the sequence: mono-, 3- and 9-layer was suggested in the literature, but the mechanism was for the first time confirmed experimentally.

The group from the IPC PAS studied also substances, where the intermolecular interactions were not sufficiently flexible. During compression of such compounds, it is not the monolayer that folds and rolls over, but single molecules are pushed out over the monolayer and after detachment from water surface aggregate in pairs. Being non-volatile, they stay with the monolayer and are ordered with increasing pressure, forming at once two layers on the monolayer. This newly recognised mechanism explains why multilayers increase their thickness in sequence 1-3-5-7 monolayers.

The researchers from the IPC PAS are convinced that processes similar to the both observed ones occur also for other chemical compounds with similar molecular structure.

Practical application of the ordered multilayers is possible after transferring them from the water surface onto a solid substrate, e.g. silicon wafer. To do so, a silicon wafer is repeatedly immersed and removed from a bath consisting of water with a multilayer. Unfortunately, the monolayers of some substances are being washed out during repeated immersions. The researchers from the IPC PAS met such situation for one of the compounds studied. The measurements have shown, however, that the same compound is transferred permanently when a 9-layer is formed. This means not only that a new type of substrates can be produced but also that the time required to form thick multilayers that were previously produced by laborious deposition of up to a few dozen monolayers can be nine-fold reduced.

The cores of molecules studied in the IPC PAS have three condensed aromatic rings. Analogous structures appear in conducting polymers. “We hope that in future the derivatives of the compounds studied by us will find an application in organic electronics. We also plan to make use of the tendency for self-organisation of these molecules to organise other molecules,” comments Dr Żywociński.