Facts and figures about eutrophication

Eutrophication is a slow ageing process during which a lake or estuary evolves into a bog or marsh and eventually disappears. During eutrophication, the lake becomes so rich in nutritive compounds (especially nitrogen and phosphorus) that algae and other microscopic plant life become superabundant, thereby choking the lake and causing it to eventually dry up. 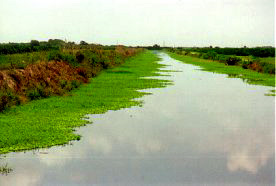 Eutrophication is accelerated by discharges of nutrients in the form of sewage, detergents and fertilizers into the ecosystem.
Eutrophication can be a natural process in lakes, as they age through geological time. Estuaries also tend to be naturally eutrophic because land-derived nutrients are concentrated where run-off enters the marine environment in a confined channel and mixing of relatively high nutrient freshwater with low nutrient marine water occurs.

Lakes and reservoirs can be broadly classified as ultra-oligotrophic, oligotrophic, mesotrophic, eutrophic or hypereutrophic depending on the concentration of nutrients in the body of water and/or based on ecological manifestations of the nutrient loading. In general terms, oligotrophic lakes are characterized by low nutrient inputs and primary productivity, high transparency and a diverse biota. In contrast, eutrophic waters have high nutrient inputs and primary productivity, low transparency, and a high biomass of fewer species with a greater proportion of cyanobacteria than in oligotrophic waters.

Eutrophication can also cause Harmful Algal Blooms (HABs), which can harm fish and shellfish, as well as the people who consume them. Some algae can cause negative effects when they appear in dense blooms, while others have potent neurotoxins and need not be present in large numbers.

Because of eutrophication, Lake Victoria in Africa has become turbid to the point that brightly coloured fish species cannot see each other clearly enough and they have begun to interbreed.

In China, Lake Dianchi near Kunming and Lake Taihu near Wuxi both suffer from extreme eutrophication. In these lakes vast areas are covered by dense algal blooms and fish-breeding has been almost totally abandoned because there is no oxygen for them to breath, especially in autumn. Almost all native water plants and many fish species have been killed. Snails die from lack of oxygen in the bottom water and in addition the poor water quality makes it very difficult to supply water for domestic use that meets legal standards.