Picture two snowmen standing side by side beneath a spring sun. One is pristine white, the other has been coated with rusty brown dust. As the day wears on, a pool of water collects beneath the dusty snowman. He will dissolve long before the untarnished snowman loses his head. 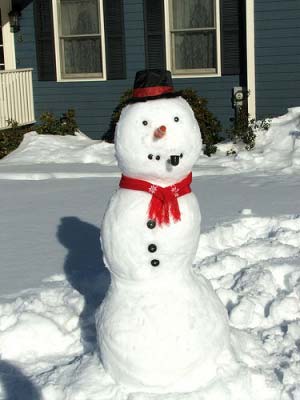 This snowman, comprised of clean snow, will melt much slower than one speckled with dust.

The dusty snowman’s rapid demise occurs because the dark color decreases snow’s ability to reflect sunlight. The particles absorb it and conduct heat to the snowman’s body. The same process appears to have been playing out on a larger scale for 150 years in the mountains of the Upper Colorado River Basin, the birthplace of the Colorado River.

Rust colored desert dust on the snowpack has been causing snow to melt on average three weeks earlier than it did before human activities in the West disturbed its pristine ecosystem, around the middle of the 19th century, according to a study by researchers from NASA’s Jet Propulsion Laboratory and the University of Colorado’s Cooperative Institute for Research in Environmental Sciences (CIRES). (For a CIRES press release on the research, go here.)

This has been robbing the river of some 750,000 acre-feet of water each year, on average, compared to the undisturbed conditions that preceded human settlement. Astonishingly, that’s enough to supply the entire city of Los Angeles for 18 months.

These findings come at a time when the Southwest is in its 11th year of the most severe drought since 1900, and increasing water demands from expanding cities are placing added strain on the Colorado River.

To learn more about what’s going on, I visited study co-author Jeffrey Deems in his office at the National Snow and Ice Data Center in Boulder, Colorado. As part of his research, he digs pits in the snowpack to examine layers of compressed dust buried by fresh snowfall.

As I peered over his shoulder at pictures of snow pits on his computer monitor, Deems explained that dust stacks up on the surface, instead of percolating down into the snowpack. As the snow surface melts down, the dust becomes more concentrated and darker. This, in turn, causes snow to melt more rapidly.

The earlier melt exposes plants and soil that in the past stayed covered for a longer stretch in the spring. Out in the open, the soil and plants transmit water into the atmosphere through a process called evapotranspiration.

Because of the impact of dust on snowpack, there’s more evapotranspiration happening in the spring than there would be if dust was not being deposited onto the snow surface. This means less water winds up running off into streams and rivers, reducing their flow.

To arrive at their estimate of a five percent reduction of flow, the researchers used a hydrological model that simulated annual runoff at Lees Ferry, a point on the Colorado 15 miles below Lake Powell, during the period between 1916 and 2003, and computed average changes from conditions before human settlement.

A dusty road along the Colorado River in Utah not far from Moab. The salmon color of the sky comes from dust swept up by winds. Copyright Tom Yulsman.

A dusty road along the Colorado River in Utah not far from Moab. The salmon color of the sky comes from dust swept up by winds. Copyright Tom Yulsman.

Why is Colorado’s snowpack dusty? To get an answer, I sought out Jason Neff, a University of Colorado biogeochemist who studies cycling of chemicals and nutrients through ecosystems.

Dust, he explained, is scooped up by winds in the Great Basin, Colorado Plateau, Sonoran and Mojave deserts, and ferried to the mountains. Over the millennia, dust falling onto the surface of azure alpine lakes in Colorado’s San Juan Mountains has settled to their muddy bottoms and accumulated little by little. And by analyzing cores of sediments pulled up from those lake bottoms, Neff has documented an arresting increase in dustiness.

The research shows that the past 150 years have been five times dustier than the average for the last five millennia. He cites the arrival of Anglo-Saxon settlers in the West, and the ensuing cattle grazing, construction of railroads, and other activities, as kick-starting the era of increased dust production.

“What we see in the lakes suggests that the greatest dust production was 100 years ago,” Neff says. “It has declined somewhat since then. It’s likely the source of dust has changed. There’s still dust kicked up by cattle, but there’s also oil and gas, recreational vehicles, there’s city development, agricultural lands, all these different things contributing all at once.”

The good news is that it’s possible to cut back on dust production. In fact, Neff’s measurements indicate that after the 1934 Taylor Grazing Act decreased the number of livestock in the Southwest, dust deposition in the mountain lakes declined.

His work also suggests that a delicate, protective layer, called biological crusts, which naturally develop over desert soils, can regenerate after being busted up by grazing and other activities, thereby decreasing wind erosion — but only if the offending disturbance is removed. (For links to the dust research by Jason Neff and his colleagues and students, click here.)

Reducing disturbances is key, Deems says. “This isn’t necessarily a remove all humans from the equation kind of solution, but [it involves] identifying hotspots for dust emission and changing land management practices there.”

In a region where land use is a highly contentious topic, however, that may be easier said than done.