It’s not the newest hair-loss solution for men. But it is cool photography.

In a recent series of photos called Water Wigs, L.A. photographer Tim Tadder captures photos of bald men getting pounded with water balloons on the head. The water flowing around their shiny jugs looks like their missing hair might if they were driving with their heads out the window. 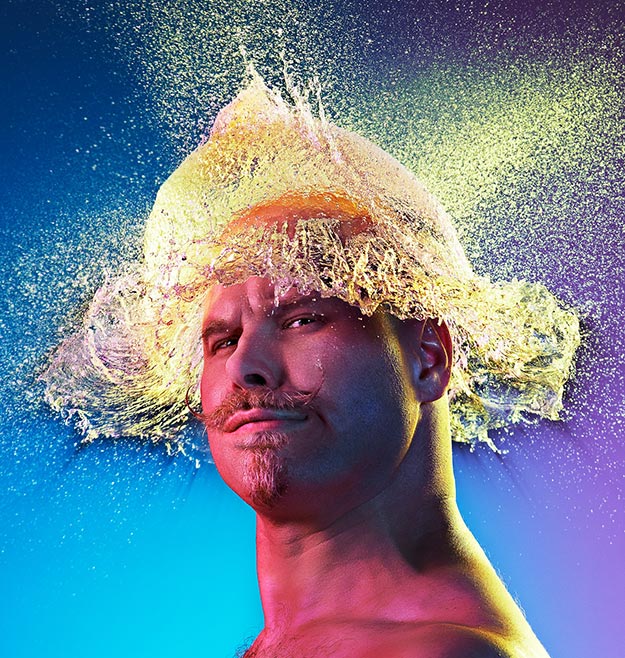 “I got tired of repeating the same thing all the time,” says Tadder, a successful commercial photographer who has become known for his edgy ads for companies such a Gatorade and Adidas. “I wanted to find a visual concept that I’d never seen before.”

Water was on Tadder’s mind because he had recently finished another creative project called Fish Heads where he photographed people just as they stuck their heads underwater in a fish tank. Water Wigs seemed like a logical progression.

The technical aspects of the wig photos are tricky. Capturing the difference between a balloon exploding in the right place and the wrong place comes down to just milliseconds. Even the minuscule amount of shutter delay on the Nikon D800 Tadder was using could interfere with capturing the peak action, so he decided to use a bulb exposure with the shutter left open.

To do this, however, he had to make his studio completely dark and freeze the action with a high-speed flash firing at one ten-thousandth of a second. Not surprisingly, it took a while to get things right.

“You can only throw a water balloon at [a model’s] head so many times,” he says.

To make it work, Tadder had an assistant up on a ladder with the balloon in hand. The assistant would then shine a flashlight on the model’s head, figure out their aim, turn the flashlight off and get ready to throw.

For Fish Heads, Tadder used a laser trigger that shot a beam of light across the fish tank, triggering the camera as soon as the person’s face crossed the plane — just like a cliché heist movie. He tried the same thing for Water Wigs, but found it didn’t work well.

He aimed the laser just above the model’s head and set a slight delay on the flash, hoping the balloon would cross through the laser and the flash would fire milliseconds later as the explosion happened. The problem was that working in milliseconds can be tricky, and too often the flash would fire just as the balloon hit the model’s head but before the actual explosion. “We had to get lucky to capture the explosion,” he says.

The fix came in the form of a sound trigger that uses a microphone to capture the noise made by the explosion. Once it detected that noise it would fire the flash, guaranteeing that some form of the explosion was captured in every frame.

To get the shots where the models look like they have a water mohawk or halo, Tadder says they used the kind of long narrow balloons that clowns use for balloon animals. He and his assistants would fill the balloons with water and then place them on the model’s head. An assistant with a stick that had a small spike on one end would then sit on the ground out of the camera frame, reach up and pop the balloon.

In the halo shots, for example, the assistant reached up behind the model’s head, which hid the stick, and popped the balloon. Remember, however, that this all had to happen in the dark, making it slightly dangerous for the models.

“It was totally precarious,” Tadder says. ” I was psyched that no one beat me up and no one got hurt.”

The final touch came in the form of the color palette Tadder used to saturate the pictures. He says that instead of positioning the models against a white or gray backdrop he wanted to make it more interesting so he placed a series of colored gels over his flashes.

As a commercial photographer, he’s become known for the darker, contrast-y shots he produces, so adding color changed things up. That, and Tadder says he has two young daughters who are obsessed with colors like pink, magenta and yellow. “Your visual identity is often based on what you’re around right?” he says.

So far the shots have been well received, spreading quickly across the internet. The response has been positive, but Tadder says he’s gotten quite a few requests that women be included in the next series if he’s going to continue with bald models.

“How awesome would that be?” he says.