Climate change threatens every part of the U.S. in one-way or another, but in South Florida, it’s not just a threat: it’s a looming catastrophe. Much of the area lies just a few feet above sea level, and thanks to warming temperatures and melting polar ice, the sea is on the rise. A few decades from now, significant parts of the region could literally be underwater. Not only that: while hurricanes could be fewer as time goes on, the ones that do sweep in are likely to be more powerful, with higher winds and more devastating storm surges that will drive the high water much deeper inland.

But that’s not what keeps people like Earl King up at night.

King is the Deputy Director of Public Works, Utilities and Engineering in Hallandale Beach, just south of Ft. Lauderdale. Among other things, he’s in charge of making sure his town has access to fresh drinking water. But the sea is pushing in from underground to contaminate the community’s wells — and as sea level rises, the problem is only going to get worse.

It’s the same story all over the Florida coast. Some five million people get their fresh water from a huge natural underground reservoir called the Biscayne Aquifer. Even before the ocean began to rise, the aquifer was under assault. The reason lies off to the west, in the huge, swampy landmark known as the Everglades. Left to itself, the Everglades would constantly be fed with fresh water from Lake Okeechobee to the north.

“The ground [in the region]… acts like a sponge,” says Carol Mitchell, Deputy Director of the South Florida Natural Resources Center at the Everglades National Park. “If you pour water on top of it, it will all filter down and bubble up somewhere else.” The Biscayne Aquifer is one of those “somewhere else’s”, and the constant inflow once kept the brackish seawater at bay.

But in the 1880’s, a young millionaire named Hamilton Disston bought four million acres of land south of Lake Okeechobee and began dredging canals, determined to transform alligator-infested swampland into productive farmland — the first of many campaigns to drain the Everglades in the name of agriculture. As a result, each year billions of gallons of freshwater that once made their way into the Everglades are now being channeled away through canals running east and west of Lake Okeechobee. Meanwhile, a growing and thirsty population began pumping water out of the aquifer. With less fresh water going in and more coming out, the Biscayne has been shrinking, and the ocean has rushed in to fill the void. 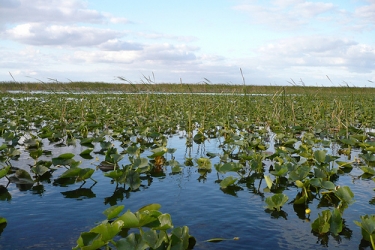 More than a century of agricultural and residential development have greatly reduced freshwater flow in the Everglades. Credit: flickr/Balthazira.

Wells like the ones in Hallandale Beach are one place the intrusion is becoming more evident. “U.S. Geological Survey readings have been showing a steady salinity climb,” says King of his town’s wells.

Another is the hardwood hammocks and coastal buttonwood forests inside Everglades National Park. A study published recently in the journal Climatic Change showed that between 1999 and 2009, salt-tolerant plant species were starting to move in as salt-intolerant species die out.

“It’s not farfetched to say that some of these plant communities will show irreversible change in 25 to 50 years,” says Sonali Saha, a biologist at the Institute for Regional Conservation in Miami and a co-author of the study.

Rising seas will tend to push even more salty water into wells and swamps. The good news is that a single solution can help maintain both the health of the Everglades and the water supply of South Floridians: restore the flow of freshwater into and within the Everglades. Several projects are under way to do just that.

The bad news: the projects may delay saltwater intrusion enough so that ecosystems adapt, but they won’t keep the sea at bay forever.

In the short run, a human retreat from watershed areas below Lake Okeechobee might boost the amount of freshwater flowing into the Everglades from inland Broward County, northwest of Miami. But as David Letson, a natural resources economist at the University of Miami, points out, that is not an attractive option, since it would likely inundate agricultural areas and flood some residential communities as well.

According to the city of Miami’s Climate Action Plan, Miami-Dade County is already working with the South Florida Water Management District and federal agencies on Everglades restoration. The county is also currently assessing how best to counter salt-water intrusion and local flooding with new pumping stations. Meanwhile, Miami-Dade is also re-emphasizing water conservation.

That’s enough to give anyone insomnia.