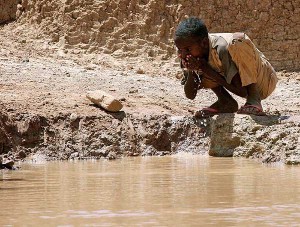 Recent widespread news coverage heralded the success of a United Nations’ goal of greatly improving access to safe drinking water around the world.

But while major progress has been made, a new study from the University of North Carolina at Chapel Hill indicates that far greater challenges persist than headline statistics suggested.

Earlier this month (March 6), UNICEF and the World Health Organization issued a report stating that the world had met the U.N.’s Millennium Development Goal target of halving the proportion of people without access to safe drinking water, well in advance of a deadline.

That goal aimed to boost access to improved drinking water sources, such as piped supplies and protected wells, between 1990 and 2015.

However, the new UNC study estimates that 1.8 billion people – 28 percent of the world’s population – used unsafe water in 2010.

That figure is 1 billion more than the official report’s estimate that 783 million people (11 percent of the globe) use water from what are classified as unimproved sources by WHO and UNICEF’s Joint Monitoring Program.

The new study’s lead author, Jamie Bartram, Ph.D., professor of environmental sciences and engineering in the Gillings School of Global Public Health, said the WHO/UNICEF report highlighted the progress that could be achieved through concerted international action, but left outstanding the needs of millions of people who only have access to dangerous contaminated drinking water.

“If you look at the water people use and ask ‘Is this contaminated?’ instead of ‘Is this water from a protected source?’, the world would still be well short of meeting the Millennium Development Goal target,” said Bartram, also director of the Water Institute at UNC.

“In many parts of the world, water from ‘improved sources’ – like protected village wells and springs – is likely to be microbiologically or chemically contaminated, either at the source or by the time people drink it,” he said.

“In developing countries, whether you live in small village or a big city, safe water can be hard to come by: pipes and taps break, clean springs and wells become contaminated or people have to carry or store water in potentially unsanitary ways.”

The study, “Global Access to Safe Water: Accounting for Water Quality and the Resulting Impact on MDG Progress,” was published March 14, 2012, in the International Journal of Environmental Research and Public Health.

Bartram and colleagues analyzed water quality and sanitary risk information from an earlier study of five countries, and extrapolated the data to estimate global figures.

Their study suggested that of the 5.8 billion people using piped or “other improved” water sources in 2010, 1 billion probably received faecally contaminated water. Adding that tally to the nearly 800 million people who collect water from unimproved sources would mean 1.8 billion people are drinking unsafe water.

Furthermore, Bartram and colleagues estimated that another 1.2 billion people got water from sources that lack basic sanitary protection against contamination.

“All told, we estimate 3 billion people don’t have access to safe water, if you use a more stringent definition that includes both actual water quality and sanitary risks,” Bartram said.

He highlighted that the recent WHO/UNICEF announcement confirmed how much had been achieved since the Millennium Development Goals were adopted in 2000, and that this progress should lead to a progressive shift towards ensuring that every home, workplace and school has reliable water supplies that are – and remain – safe.

However, he said the magnitude of the UNC study’s estimates and the health and development implications suggest that greater attention needs to be paid to better understanding and managing drinking water safety.