The hydrologic cycle is a conceptual model that describes the storage and movement of water between the biosphere, atmosphere, lithosphere, and the hydrosphere (see Figure 1). Water on our planet can be stored in any one of the following major reservoirs: atmosphere, oceans, lakes, rivers, soils, glaciers, snowfields, and groundwater. Water moves from one reservoir to another by way of processes like evaporation, condensation, precipitation, deposition, runoff, infiltration, sublimation, transpiration, melting, and groundwater flow.

Water is more or less constantly moving and changing from one state to another (solid, liquid, or vapor/gas) while interacting with the physical processes present in the atmosphere, lithosphere, and biosphere. These changes and movements of water are linked together in the hydrologic cycle. Components of the hydrologic cycle include water vapor and clouds in the atmosphere, but also include liquid surface waters (oceans, lakes and streams) on continents as well as groundwater. Other important components of the hydrologic cycle include glacial ice held on continents, and water contained in biomass. Plants and animals are about 70% water, by volume. Water evaporates in enormous quantities from the oceans and then falls as precipitation either on land or ocean. That portion which falls on land evaporates, is transpired by plants, runs off, or infiltrates by some measure. Between the various stages of the hydrologic cycle, water moves between temporary storage areas often called reservoirs. These movements are controlled by climatic conditions, which include rain, snow, wind, and other meteorological processes. Eventually, all water ends up back in the ocean.

Various pathways exist in the hydrologic cycle. In non-vegetated systems interception processes usually do not occur, however, within vegetated systems, precipitation can be intercepted and lost to evaporation. In vegetated systems, some precipitation may reach the ground by stemflow, but most often reaches the soil by a process called throughfall. Precipitation that reaches the soil surface can then infiltrate and recharge soil waters. From there it can percolate through soil to deeper soil layers or groundwater supplies. The rate of evaporation from soils or surface waters (including oceans) can be influenced by several factors including radiation, temperature, relative humidity, and wind. Warmer air can hold more water vapor, thereby generating increased evaporation rates. Drier air can accept much more water vapor than air that is nearly saturated, and windy conditions generally accelerate evaporation. Transpiration from plants takes place via water loss from the stomates, the gas exchange organs found on the leaves of plants. The stomates also act as an important cooling mechanism for plants by means of latent heat absorbed and transferred from the plants through evaporation/transpiration processes. This process is also that which supplies the tensional forces necessary to help draw water into roots from the surrounding soil. Transpiration is often lumped with evaporation and is then called evapotranspiration. With enough energy added, water can be converted directly from a solid (ice) to water vapor. This process is called sublimation. Sublimation is the result of ice going directly from a solid to water vapor without passing through a liquid state.

Air can only hold a certain amount of water vapor. The amount depends largely upon temperature; thus, as mentioned, hotter air can hold more water vapor than colder air. When air is saturated with water vapor, the water vapor condenses into droplets of water, forming clouds. When the droplets gain enough mass, they fall to the ground as rain or snow.

Water that falls as snow or rain evaporates, sublimates, runs off the ground surface (runoff) or soaks into the ground (infiltration). Whether the water runs off or infiltrates is controlled by a number of mechanisms including precipitation rate, soil water content, slope and vegetation. With increased rates of precipitation, runoff rates tend to increase. In extreme cases, rapid cloudbursts of precipitation can result in flash floods and potential land slides. Prior to rainfall, the relative amount of soil water content can dictate the amount of water that soil can hold before saturation. Generally, more water will infiltrate into dry soil than into a wet soil, and more water will run off steeper slopes than off moderate slopes. The presence of vegetation can counteract this process by holding more water than the hill slopes would by themselves. Hillsides that have undergone timber harvest or have been burned will often suffer severely from mudslides and flooding. Runoff processes within the hydrologic cycle include streamflow and groundwater flow, each of which eventually result in flow to ocean reservoirs. Lakes and streams may occur in low points of the landscape due to streamflow, or where the groundwater table emerges above the surface. Other contributors of the runoff process include melting of glacial ice, and calving of iceburgs into the sea. On a global basis, precipitation exceeds evapotranspiration over continents, and evaporation exceeds precipitation over ocean reservoirs, while excess water moves from continents to oceans as runoff. The ratio of precipitation rate to evaporation rate can vary dramatically between regions. For example, in tropical rainforests, precipitation may greatly exceed evapotranspiration. 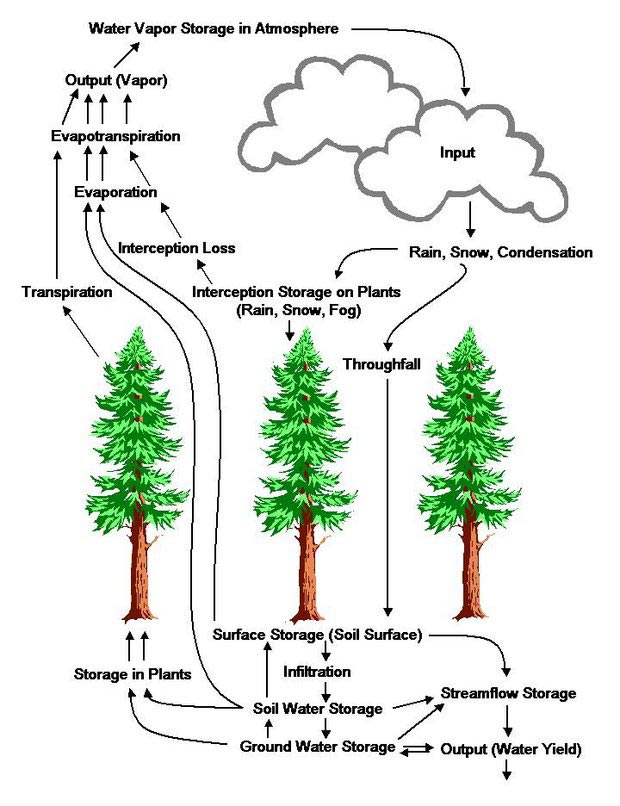 Often, rates of hydrologic activity are measured in terms of “mean residence time”, or the average amount of time that water remains in its various states or reservoirs. For example, the mean residence time of a water molecule in the atmosphere is very short, usually from days to a week or two. Water tends to move quickly through plant and animal tissues, but can be stored in cells for a much longer period of time. It can take weeks to months for water to move through surface drainage networks depending upon the complexity of the geomorphologic network. Water may be stored for months to years in soil water and individual water molecules may remain in deep groundwater, glaciers and ocean basins for decades to 10,000 or more years.

Traditionally, quantities of water transferred within the global hydrologic cycle are described in terms of cubic kilometers (km3) by virtue of the immense quantities held in respective reservoirs. Each km3 of water contains 1.0E12 liters and weighs 1.0E15 grams. Often, changes in the water cycle are discussed in terms of depth, for example centimeters per year (cm/yr) or millimeters per hour (mm/hr). On an annual basis, approximately 100 cm of water are evaporated from the surface area of oceans. Oceans, which also happen to be the dominant pool in the global water cycle, contain approximately 1,350,000 km3 of water. Of this, approximately 425,000 km3 are evaporated to the atmosphere each year, 385,000 km3 is returned directly to the oceans via precipitation, and 40,000 km3 is delivered to land by rainfall (net transport to land). At any given time, the atmosphere contains about 13,000 km3 water, or approximately 0.3 cm of rainfall. It is the large quantities of annual water movement through the atmosphere that results in 111,000 km3 being precipitated upon land and vegetation and 71,000 km3, which is either evaporated or transpired (evapotranspiration). Polar and glacial ice reservoirs account for approximately 33,000,000 km3 water, water held in soils is equal to approximately 122,000 km3, and groundwater basins hold approximately 15,300,000 km3.