Facts and figures about water and climate change

Climate change is associated with global warming and is a long-term change caused by natural factors and, as is now accepted, human activities due to greenhouse gas emissions. 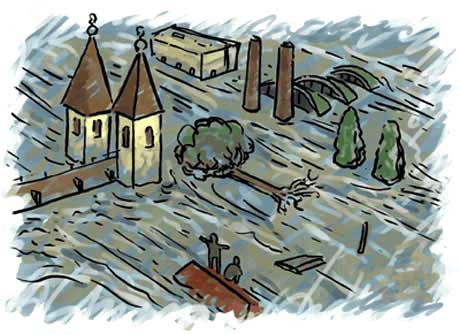 It is generally agreed that more precipitation can be expected from 30° North and 30° South because of increased evapotranspiration. In contrast, many tropical and subtropical regions are expected to receive lower and more erratic precipitation in the future.
Climate change is having a significant impact on weather patterns, precipitation and the hydrological cycle, affecting surface water availability, as well as soil moisture and groundwater recharge.

It has been suggested that the number of environmental refugees could rise to 150 million by 2050 as one of the results of climate change.

If climate change follows the projected scenarios, we can expect more erratic weather in the future, including increased variability in precipitation, which will threaten crop yields in both developed and developing countries, while placing more than 2.8 billion people at risk of water shortage.

On a global level, polar and arid systems appear to be the most vulnerable to climate change. Polar systems store the vast majority of freshwater, and most scenarios suggest they are likely to develop a considerably increased discharge of water, driven by higher temperatures in both the polar regions and particularly in the Arctic.

While global warming may increase productivity in some regions and habitats, the overall predictions are that the impacts of climate change on aquatic ecosystems will be detrimental. Coastal wetlands such as mangroves and coral reefs (Southeast Asia), coastal lagoons (Africa and Europe) and river deltas (the Nile, Niger and Congo in Africa; the Ganges and Mekong in Asia) will be seriously affected by rising water levels, as well as other coastal lowland areas with an elevation of less than 0.5 m.

A recent study estimates that climate change actually accounts for about 20% of the global increase in water scarcity, the remaining 80% accounted for by population growth and economic development.

In large parts of eastern Europe, western Russia, central Canada and California, peak stream flows have shifted from spring to winter as more precipitation falls as rain rather than snow, therefore reaching the rivers more rapidly. In Africa’s large basins of the Niger, Lake Chad and the Senegal river basin, total available water has decreased by 40–60%.