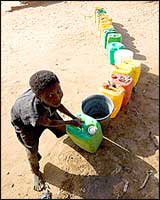 Water is essential for all socio-economic development and for maintaining healthy ecosystems. As population increases and development calls for increased allocations of groundwater and surface water for the domestic, agriculture and industrial sectors, the pressure on water resources intensifies, leading to tensions, conflicts among users, and excessive pressure on the environment. The increasing stress on freshwater resources brought about by ever rising demand and profligate use, as well as by growing pollution worldwide, is of serious concern.

What is water scarcity? Imbalances between availability and demand, the degradation of groundwater and surface water quality, intersectoral competition, interregional and international conflicts, all contributes to water scarcity.

Scarcity often has its roots in water shortage, and it is in the arid and semiarid regions affected by droughts and wide climate variability, combined with population growth and economic development, that the problems of water scarcity are most acute.

Water use has been growing at more than twice the rate of population increase in the last century, and, although there is no global water scarcity as such, an increasing number of regions are chronically short of
water. By 2025, 1 800 million people will be living in countries or regions with absolute water scarcity, and two-thirds of the world population could be under stress conditions. The situation will be exacerbated as rapidly growing urban areas place heavy pressure on neighbouring water resources.

Addressing water scarcity requires actions at local, national and river basin levels. It also calls for actions at global and international levels, leading to increased collaboration between nations on shared management of water resources (rivers, lakes and aquifers), it requires an intersectoral and multidisciplinary approach to managing water resources in order to maximize economic and social welfare in an equitable manner without compromising the sustainability of vital ecosystems.

Integration across sectors is needed. This integration needs to take into account development, supply, use and demand, and to place the emphasis on people, their livelihood and the ecosystems that sustain them. On the demand side, enhancing water productivity (the volume of production per unit of water) in all sectors is paramount to successful programmes of water scarcity alleviation. Furthermore, protecting and restoring the ecosystems that naturally capture, filter, store and release water, such as rivers, wetlands, forests and soils, is crucial to increasing the availability of water of good quality.

First and foremost, water scarcity is an issue of poverty. Unclean water and lack of sanitation are the destiny of poor people across the world.

Lack of hygiene affects poor children and families first, while the rest of the world’s population benefits from direct access to the water they need for domestic use. One in five people in the developing world lacks access to sufficient clean water (a suggested minimum of 20 litres/day), while average water use in Europe and the United States of America ranges between 200 and 600 litres/day. In addition, the poor pay more. A recent report by the United Nations Development Programme shows that people in the slums of developing countries typically pay 5-10 times more per unit of water than do people with access to piped water (UNDP, 2006). 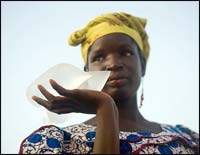 For poor people, water scarcity is not only about droughts or rivers running dry. Above all, it is about guaranteeing the fair and safe access they need to sustain their lives and secure their livelihoods. For the poor, scarcity is about how institutions function and how transparency and equity are guaranteed in decisions affecting their lives. It is about choices on infrastructure development and the way they are managed. In many places throughout the world, organizations struggle to distribute resources equitably.

Water for life, water for livelihood. While access to safe water and sanitation have been recognized as priority targets through the Millennium Development Goals (MDGs) and the Johannesburg plan of action of the World Summit on Sustainable Development (WSSD), there is increasing recognition that this is not enough. Millions of people rely in one way or another on water for their daily income or food production. Farmers, small rural enterprises, herders and fishing people – all need water to secure their livelihood. However, as the resources become scarce, an increasing number of them see their sources of income disappear. Silently, progressively, the number of water losers increases – at the tail end of the irrigation canal, downstream of a new dam, or as a result of excessive groundwater drawdown.

It is probably in rural areas that water scarcity affects people most. In large parts of the developing world, irrigation remains the backbone of rural economies. However, smallholder farmers make up the majority of the world’s rural poor, and they often occupy marginal land and depend mainly on rainfall for production. They are highly sensitive to many changes – droughts, floods, but also shifts in market prices. However, rainwater is rarely integrated into water management strategies, which usually focus exclusively on surface water and groundwater. Countries need to integrate rainwater fully into their strategies to cope with water scarcity.