It looks blue, but it’s green, and it’s here. As big, eye-catching Olympics architecture goes, nothing may be as sustainable as the Beijing National Aquatics Center, or Water Cube, the latest cutting-edge building to open on the enormous construction site that is China. 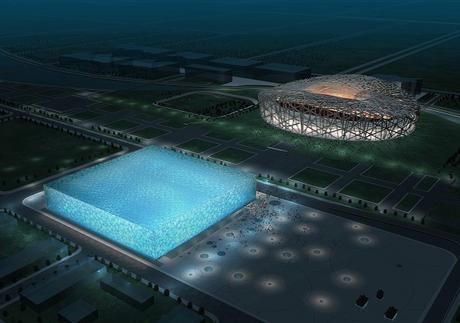 But it does more than look cool. The 100,000 square meters of the Teflon-like translucent plastic ETFE that make up the building’s bubble cladding allow in more solar heat than glass, making it easier to heat the building, and resulting in a 30 percent reduction in energy costs. That’s especially important for a swimming pool, which requires an enormous amount of heating. (Though the building’s ETFE was manufactured abroad, meaning more pollution in construction than would there have been with locally available materials, designers emphasize that the energy savings are substantial, equivalent to covering the roof in solar panels.) 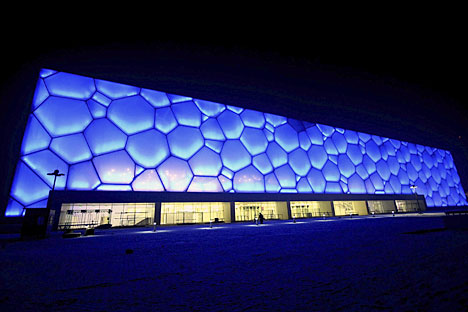 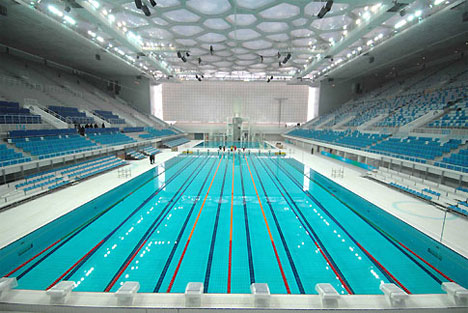 Air-tight, the futuristic LED-lit bubbles not only act as adjustable insulators, turning the building into a greenhouse, but also serve as storehouses for warm air that can be pumped into the Cube as needed. Though it’s only .008 of an inch thick, ETFE, which has been used to a lesser extent in the UK’s Eden Project and Germany’s Allianz Arena can hold up to 300 times its weight. Without trussing, it can span greater distances than glass, and costs up to 70 percent less to install. Though critics say it will need frequent scrubbing (Beijing’s grit had clearly left its mark on the building today), the material is billed as more self-cleaning than glass, and can be recycled. 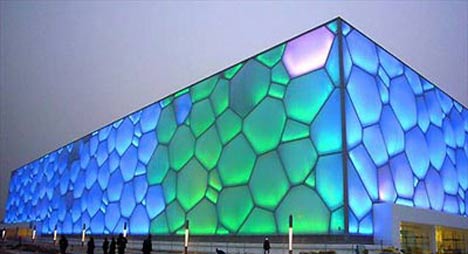 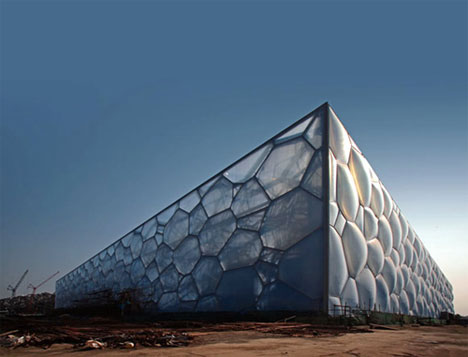 But the Cube’s facade probably won’t need to be recycled any time soon. Unlike the similarly stunning, steel-encumbered National Stadium nearby, which some fear could go from a “Bird’s Nest” (its nickname) to a “white elephant” once the Games are done, the Water Cube is set for a lengthy, sustainable afterlife (its construction hasn’t killed anybody either, at least officially). “What it is for the next 30 years is more crucial than what it is during the Olympics,” PTW’s John Pauline, one of the building’s lead architects, tells Treehugger. 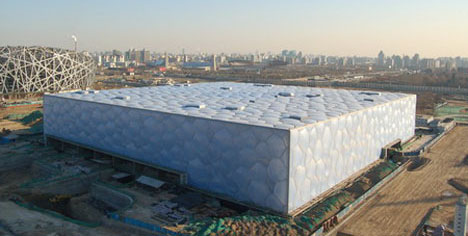 “It’s very common in Olympic planning to focus on the now rather than the future. More important is what happens in the next phase [of the Water Cube’s life],” which will see the building converted into a recreation center for nearby residents. “We dedicated only a third of the Water Cube to the swimming pool. When visitors come after the Olympics, they’ll be able to play a game of tennis, go on the waterslide, and so on.” Upstairs, the Cube features a cafe.