Small, autonomous airboats, disguised to look like crocodiles, helped scientists measure water quality this spring in Kenya’s Mara River. An estimated 4,000 hippos use the river as a toilet with potentially deadly effects for fish living downriver. 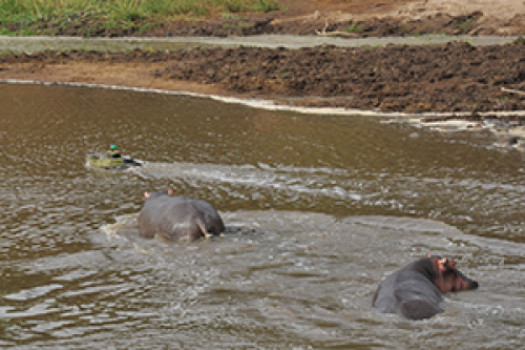 Autonomous airboats, disguised to look like crocodiles skimmed the surface of hippopotamus pools in Kenya’s Mara River where they scanned the river bottom for deposits of hippo dung and made various water quality measurements.

The airboats, developed at Carnegie Mellon University’s Robotics Institute and operated by a CMU spinoff, Platypus LLC, skimmed over the surface of several hippopotamus pools in the river, where they scanned the river bottom for deposits of hippo dung and made various measurements of water quality.

No human would dare venture onto this brown water in which so many hippos slosh around. But the animals, considered among the most dangerous in Africa, generally tolerated the two-foot-long boats much as they do the river’s crocodiles.

One did give chase, but briefly.

“Those were 30 seconds that none of us will forget,” said Paul Scerri, an associate research professor in CMU’s Robotics Institute and president of Platypus. In the end, the 13-pound boat, made of vacuum-formed plastic and filled with the same sort of airbags commonly used as packing material in parcels, managed to outrun the 2-1/2 ton hippo.

The robotic boats supported the work of researchers Amanda Subalusky, Christopher Dutton, and David Post of Yale University, and Emma Rosi-Marshall from the Cary Institute of Ecosystem Studies, who have been studying water quality on the Mara since 2008. They suspect that hippos, which spend their nights grazing in the savanna grasslands and their days wallowing and defecating in the river, are responsible for water quality problems, particularly during periods of low flow.

Each hippo produces about 22 pounds of wet dung each day, Subalusky said. When the river is running high, this dung simply moves down river, but during low flows the dung settles to the bottom of hippo pools, where bacteria feed on it and consume lots of oxygen. During subsequent high flows, oxygen levels downriver crash and fish kills can occur. She and Dutton suspect this is because hippo feces is being flushed from the hippo pools. The problem is, they haven’t been able to get close enough to find out.

“Hippos are very territorial and aggressive and have been known to attack boats,” Subalusky explained. “We have to work with armed rangers when we get in the river anywhere, but we would never be able to get into a hippo pool.”

One of their mentors connected them with Scerri, who arranged for Christopher Tomaszewski, Abhinav Valada and John Scerri of Platypus to take three of the boats to Kenya in March. The boats use Android smartphones for onboard computing and are designed to navigate autonomously, working alone or in groups to perform water monitoring in bodies of water or aid first responders following floods.

During the trio’s three week stay in Kenya, they were able to deploy the boats, one at a time, over 10 different hippo pools. “It’s a different sort of scientific process in the field there,” said Scerri, who visited the project for four days. “You go where you can and do what you can.” The sonar sensors aboard the boats were used to create depth maps of the pools and to measure the depth of the fecal deposits, while other sensors checked such water quality parameters as water temperature, oxygen content and electrical conductivity.

The data are still being analyzed and are unpublished, so the researchers can’t draw any conclusions yet. But as luck would have it, they were able to measure several pools both before and after a flushing event, so they have reason to hope that the findings will be meaningful.

The boats were disguised as crocodiles at the suggestion of a local Maasai guide and, with one exception, the hippos seemed unfazed by the presence of the strange machines. A winch system added to one of the boats failed and the water-cooled boats suffered from clogged intakes at least once, but otherwise the boats fared well, Scerri said.