Countless marine microbes called Prochlorococcus are the primary basis for most ocean food webs, yet microbiologists know very little about the diversity with this group of photosynthetic bacteria. 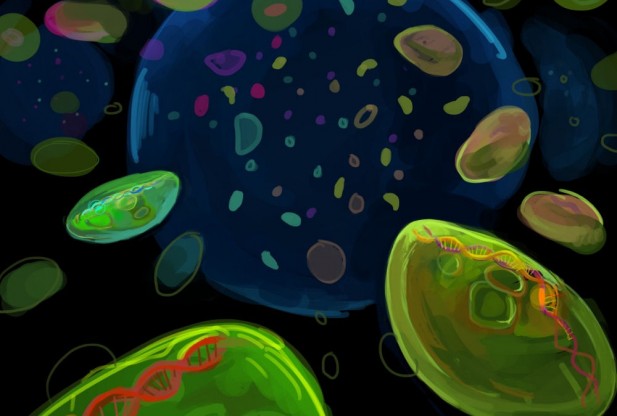 Prochlorococcus in freeform, an artist’s rendering of microbes in the ocean.

A new study, published in the journal Science, describes hundreds of subpopulations of these essential marine bacteria. An international team of researchers were able to identify the different subgroups through a comprehensive genomic analysis of microbes found in a milliliter of ocean water.

“The sheer enormity of diversity that must be in the octillion Prochlorococcus cells living in the seas is daunting to consider,” said study author Sallie Chisholm, a professor of environmental studies at MIT. “It creates a robust and stable population in the face of environmental instability.”

The study team found that the Prochlorococcus subpopulations all shared the same “genomic backbone” – a primary set of alleles connected to a few flexible genes. While the various subpopulations diverged at least a couple of million years ago, the genomic backbone is an older, slow changing component of the genome, the flexible genes inhabit parts of the genome where swapping is fairly frequent, creating a more speedy evolution.

The study area was located in the waters around Bermuda, but the study team noted that ocean currents can quickly separate daughter cells after cell division and send them hundreds of miles in just a few days.

“The interesting question is, ‘Why does such a diverse set of subpopulations exist?’” asked study author Nadav Kashtan, a postdoctoral researcher working in Chisholm’s lab. “The huge population size of Prochlorococcus suggests that this remarkable diversity and the way it is organized is not random, but is a masterpiece product of natural selection.”

The study team said this degree of diversity is probably standard in other wild, free-moving bacteria species with massive populations and highly-varying habitats.

“This is perhaps the most sophisticated and thorough study yet to be published on the fine-scale genetic diversification of an environmental microbial species, and it correctly, I think, predicts that amazingly diverse populations may be maintained over astonishingly long times,” said Ford Doolittle, a molecular biologist at Dalhousie University in Canada who was not involved in the research. “If microbiologists persist in believing in ‘species,’ they will likely have to drastically revise upward their estimates of how many such things there are.”

“What we will probably be arguing about for a long time is what processes or forces other than selection might be responsible for such stable diversity, and, unless we find such processes, how something so seemingly well mixed as the ocean can offer up so many different tiny selective regimes,” Doolittle added.

“This study may be setting a record for progress made in microbiology by analyzing just three drops of seawater,” said study author Ramunas Stepanauskas, a researcher at the Bigelow Laboratory for Ocean Sciences in East Boothbay, Maine.

“The results will change the way marine ecologists think about how planktonic microbes and, in turn, planktonic communities may respond to climate and environmental change,” concluded David Garrison, an ocean sciences program director at the National Sciences Foundation, which supported the research.