The size of aquatic water-breathers is strongly affected by temperature, oxygen level and other factors such as resource availability2, 14. Specifically, the maximum body weight ( ) of marine fishes and invertebrates is fundamentally limited by the balance between energy demand and supply, where is reached when energy demand = energy supply (thus net growth = 0).

What this means in practical terms is that as the oceans get warmer fish are expected to get smaller. Much smaller. Body weights are expected to shrink by 14 to 24% between 2000 and 2050. Tropical waters will be affected most, with an average fish size reduction of more than 20%. 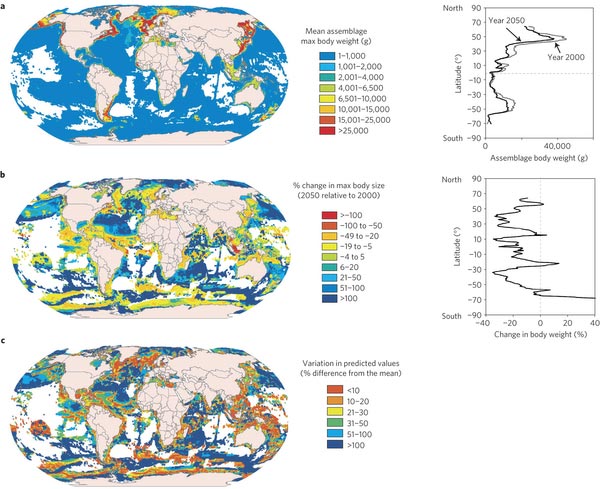 One of the excellent illustrations in the Nature study showing the decline in fish size as related to warming of the oceans.

Researchers from the University of British Columbia used computer modeling to study the effects of changes in the ocean and climate systems on 600 species of fish. The study’s lead author, William Cheung, emphasized that he and his colleagues were “surprised to see such a large decrease in fish size.” Fish in the tropics, who are smaller-bodied, are especially affected by warmer ocean temperatures and will migrate to regions that are now temperate or even to polar ones.

In warmer waters, the metabolic rate of fish increases so they need more oxygen. But, because warm water holds less oxygen, the fishes’ growth will be limited.

Climate change is already affecting marine life, with warmer water at the surface mixing less with colder water below, resulting in few nutrients from lower regions being available to surface fish. Thus, the “deserts” of the ocean are getting larger.

Unless we can do more to cut down on greenhouse gasses, we should get ready for “a hotter future with tinier and tinier fish.”