The molecular scale behavior of water at a solid/liquid interface holds fundamental significance in a diverse set of technical and scientific contexts, ranging from the efficiency of oil mining to the activity of biological molecules. Recently, it has become recognized that both the physical interactions and the surface morphology have significant impact on the behavior of interfacial water, including the water structures and wetting properties of the surface. 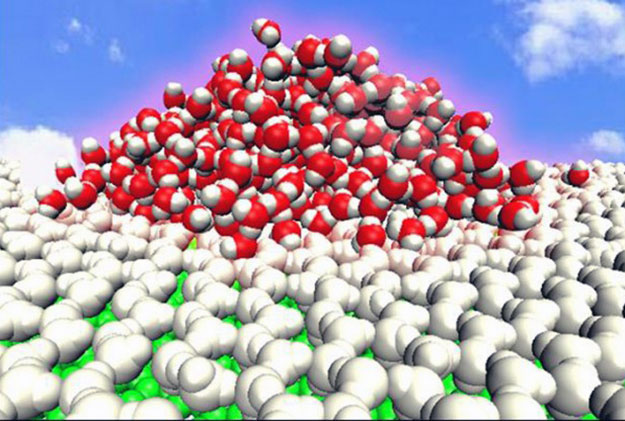 In a new review, Chunlei Wang, Yizhou Yang and Haiping Fang of the Shanghai Institute of Applied Physics report recent advances in atom-level understanding of interfacial water that exhibits an ordered character on various solid surfaces at room or cryogenic temperature.

In recent decades, they report, “with the development of computer simulation tools and experimental tools, it is possible to obtain atomic level pictures of the water structure and the complex hydrogen bond network near the interfaces.”

“Utilizing these tools, researchers have revealed that water structure may show appealing ordered structures depending on the surface morphology both at cryogenic temperatures and room temperature,” they explain. “These ordered structures of water not only exhibit novel pictures but also affect the various surface properties, such as the surface electrochemical property, surface wetting behavior and surface frictions, etc.”

“Special focus has been devoted to the wetting phenomenon of an “ordered water monolayer that does not completely wet water,” along with the underlying mechanism, on model and real solid surfaces at room temperature,” they report in the Beijing-based journal SCIENCE CHINA Physics, Mechanics & Astronomy.

The three scholars likewise outline possible applications of this phenomenon.

According to classical understanding, when water contacts other water, it will spread out and finally both mix together, i.e., water always completely wets water due to the hydrogen bonds formed among water molecules. In 2005, an ice monolayer that did not completely wet ice on metal Pt(111) surfaces was observed at extremely low temperatures.

It is well known that liquid water is essential for almost every biological process. Thus, if this exceptional behavior of liquid water exists, it might be crucial in understanding many biological activities.

However, in 2009, Haiping Fang and co-researchers numerically observed a liquid water droplet on a water monolayer on a polar model surface at room temperature, and termed the phenomenon an “ordered water monolayer that does not completely wet water” (Phys. Rev. Lett. 2009, 103, 137801).

This began to challenge the classical picture that a water monolayer always completely wets water. This work expanded understanding of hydrophobicity and hydrophilicity. The related mechanism lies in ordered water structures that reduce the possibilities of hydrogen bonds formed between the monolayer and the contacting water molecules above the monolayer. It should be noted that there remained a considerable number of dangling OH bonds in this room temperature water monolayer, in contrast with previous studies that did not report dangling OH bonds in the ordered water monolayer on a Pt(111) surface and a mica surface.