“It smelled like a big smelly cigar,” said Andy Funchess, a water systems field operations manager for the Colorado Springs water utility. Funchess spends his workdays monitoring and maintaining the city’s 25 reservoirs and hundreds of miles of pipeline and canals. 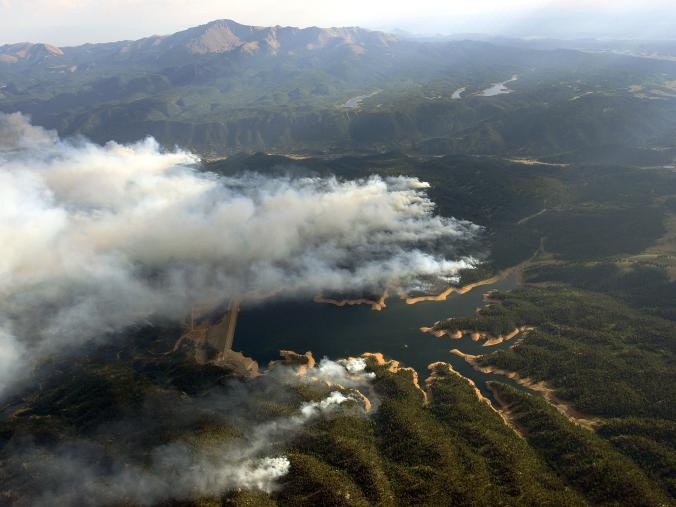 Smoke rises around Rampart Reservoir from Waldo Canyon Fire in this aerial photograph taken in Colorado Springs, Colorado, on June 27, 2012.

As strong winds helped the Waldo Canyon Fire puncture black holes into the evergreen landscape around the reservoir, Funchess gave up on trying to predict the fire’s erratic behavior and was evacuated.

The Waldo Canyon Fire, which started 11 days ago and has swept over nearly 18,000 acres, is now 70 percent contained. It hasn’t consumed the reservoir, but could have long-lasting effects on water quality—and even quantity.

Wildfires scorch soils and create ash and debris that can clog rivers and reservoirs, increasing the cost of water treatment for years to come.

When trees and underbrush burn, there is less organic material left to absorb moisture when it rains. In addition, many plants release a waxy substance when they are incinerated, creating a water-repellent coating on burn areas that heightens the risk of flash floods and contributes to erosion. Storms flush silt and other debris from the fires into rivers, reservoirs, and ultimately into municipal water-treatment facilities, slowing the treatment process.

Western water managers learned a harsh lesson ten years ago when the devastating Hayman Fire ripped through Colorado’s forests, severely impacting the extensive forested watersheds that protect rivers and water sources for more than 75 percent of the state’s residents, according to the U.S. Forest Service. The Hayman Fire—the most destructive in the state’s history, possibly until now—destroyed nearly 140,000 acres and 600 structures in 20 days.

In the wake of that 2002 fire, and the 1996 Buffalo Creek Fire, Denver Water, the public agency responsible for serving water to 1.3 million people in the Denver metro area, has spent more than $26 million on fire-related restoration, maintenance, and dredging, according to agency spokeswoman Stacy Chesney.

“We’ve seen the lingering effects of forest fires in our watersheds,” Chesney said. “Water-quality concerns are greater after a fire than they are during a fire.”

In an effort to rebuild forests and reduce the amount of gunk headed toward water infrastructure, Denver Water has worked with the Colorado State Forest Service to replant more than a quarter of a million trees in the last ten years. The water agency has also invested in sediment-control structures, such as straw bale dams, to slow runoff to reservoirs.

The Hayman Fire and the drought conditions in 2002 highlighted the vulnerability of Denver’s water-delivery system. The fire clogged reservoirs in the southern part, or South Platte River section, of the city’s far-flung water-collection network. The damage and service delays prompted controversial plans to expand reservoir capacity in the north end of Denver Water’s system—the end that relies on water from the already over allocated Colorado River.

“By enlarging Gross Reservoir [in the north], Denver Water would decrease the likelihood of running out of water in a single dry year, and would gain system flexibility to be able to respond to emergencies, such as forest fires, at other locations within our water-collection system,” said Chesney.

So far, the 2012 fires have steered clear of the Denver area.

East of the Divide

Just 60 miles north of Denver, and 135 miles north of Colorado Springs, the High Park Fire is 100 percent contained after burning nearly 88,000 acres, including swaths of Fort Collins’s and Greeley’s watershed.

Water supply managers in those cities have been on high alert since May’s Hewlett Gulch Fire, which forced the closure of diversions from the Poudre River—a water source east of the Continental Divide.

The city is relying almost entirely on Colorado River water diverted from the west side of the divide as water managers wait for damage assessments from both fires, according to Kevin Gertig, the water resource and treatment manager for Fort Collins.
In the meantime, his team will continue to monitor the water supply for suspended particles, metals such as manganese (which is common after fires), and other physical, chemical, and biological indicators of quality.