HER MAJESTY THE WATER – THE QUEEN OF LIFE (part 3)

Deep boom-sounds
Ring out their way.
The Earth is blazing.
Islands are in fire.
Sea water is boiling away.
Both – North and South Poles are
enveloped in jerks
of flame-colored blizzards,
Rushing over centuries-old icebergs.

Deep boom-sounds
Ring out their way.
It’s not an inferno’s
mushroom is rising
like a hunted beast at bay. –
We see a tremendous blazing Cross.

Christ – the Savior – with thorns crowned
Is mournfully looking down
At disastrous development
Of human’s Environment. 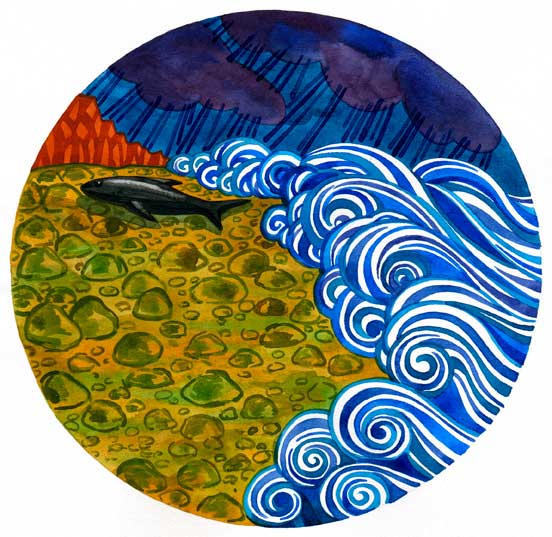 Good God! Two thousand years. And how many millenniums had passed before A.D.? Have we grown wiser? No we have not! We – cultivating in ourselves wicked rapacity – do not prohibit hunt for living creatures as a kind of some game-sport, but not as means of subsistence. Here it is …slavery in the souls. Wolves – getting in our flocks where everything is easily available – kill ships and reindeers, not being hungry. The easy meat complex enters into force. And Life returns this evil for degradation. Wolves having got accustomed to such like carnage, when getting into in natural environment, fail to catch up with a savage deer. This is what happens to people too. I have fallen in love with the book “Don’t cry “Wolves”” written by an English biologist Farley Mowat.

The book is not about humanizing of wolves. It’s about the truth of life – of reality where people behave as if they were alien extraterrestrials – they, after having read information on Farley’s research work in Canadian tundra, did not believe the scientist-practitioner and started acting like absolute imbeciles. I might have been a more striking idiot recommending all of my acquaintances to read the book. It turns out they are reluctant to follow my advice – too busy to go to pains reading. Much less pain and trouble people would face if they could comprehend Farley M.! Only a single step towards conceiving the essence of nature of the Earth might accomplish that which could not be attained through benefits stolen by human robbers ransacking the planet. It is not a matter of wolves. The matter is that Human Race should not tolerate passing Laws making thievery and depredation legal. Is it so that publicity of expressing opinions granted to most clever men by governmental power will remain a voice crying in the wilderness?– as my bosom friend Seva Vilthcek used to say.
We ought to learn from Nature to be wise – that is to cultivate sense of harmony in consuming benefits granted by Nature.

What’s next! I hate proponents of arts – even most endowed with a variety of talents – if for the purpose of creating their works of art they kill a living thing. An inevitable punishment will be inflicted on that man – never mind whatever great master one can be (painters, sculptors, film-producers, etc.) – because the mission of artists is to introduce kindness and compassion into the world.

A valley was fired by a double-barreled gun.
Snowstorm went up from under the claws.
The cage is empty – animal has gone.
Taiga is defenseless – there are no laws.

You level the camera’s viewfinder
At bared teeth of a big dead wolf.
You’re self-assured, self-satisfied.
The animal’s trembling in spastic pulls

The film reflects amber-colored eyes
with deadly look at the red rising sun.
Your easy hunt’s a success – no surprise!
Snowflakes add luster to the killing fun.

Pretty girlfriend with a rifle is posing
next to the poor vanquished victim,
Wearing a stylish fur coat and gold ring,
as if a member of the hunting team.

And in the film studio with no hue and cries
A Chief accountant doing daily rounds
Scheming remittance to a timber enterprise,
trying to run with hare and with hounds.
…The wolf is dead. Conifer’s got frozen.
A wad is oozing smoke at your bloody feet.
Name which next festival will be chosen
to treat spectators with your crazy film.

Where will you win your laureate title?
Will sea resorts set flood projectors on you?
Sparkles of diamond cuff-links are vital.
They reflect taiga tears, Nature knows it’s true. 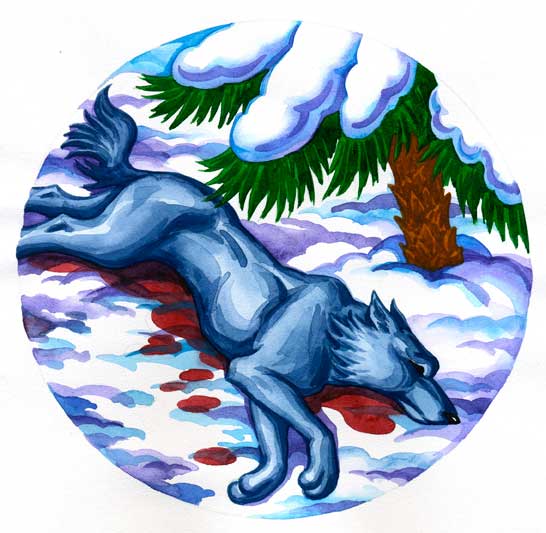 But God be thanked! Not everything belongs to the timber enterprise. There remains Water on the planet. It cannot be caged or executed. And instead of looking for methods to use violence against Water, isn’t it better to worship purity of this bounty of Nature to glance at your own reflection and realize how much good and benefit it can bring to human beings!

High spirits of mountain rivers
are not in moonlit deep dreams.
They‘re happy in clouds crushed
in pieces
In mad wild water streams.

There is joy, there is fierce
And perpetual, frenzy race
And clusters of icy peas
Got hurled into the face.

Thrust in the blue with its cool stone head
The rock has been guarding the river-bed.
Clouds of water – rooted to ground,
Cheerful rainbows jingle pebbles aloud.

Let granite slopes be fraught with risk,
Gravel screams of taking no chance,
To climb or drop from abyss cornice,
In ruptures thrilled of this gamble trance.

Thrilled by water splashes on a boulder,
Running around like a naughty child,
Bumping into resilient waves – icy scald,
Concurrently pleasing and warmly mild. 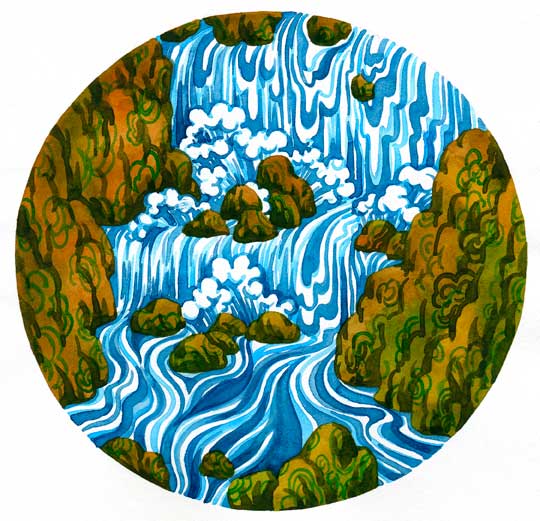 However, while in the mountains one ought to keep in mind that here nights come almost in the twinkling of an eye. And then give a futile try to find at least a single spring on hill-slopes. Three horses, growing more torpid by thirst than people, have rushed to a flume fool of water. Three wonderful muzzles have fallen down into this stone flume made by experienced highlanders. But horses are not allowed water immediately after hard journey. They – flushed up by the climb – should have a rest for a couple of hours to cool themselves down under saddles with loosened belly-bands. And only after the rest they may drink as much as they can. How could they wait for so long?! They are swallowing water like crazy camels. And what is most interesting that we ourselves, having jumped from the saddles, start guzzling this blessed water from the flume.
Sleeping bags granted us oblivion till 5 a.m… And at five o’clock, sunbeams gaily wake us up. And off we go, once again. It takes all forenoon long to get to the destination point – our survey site. Transit compass operation takes ten minutes. It takes the whole afternoon to get to the next point. There – below – one can see a turbulent river. Both – the horses and people got parched lips. Thirst…Thirst…
When we return in ten days to the camp, we – first thing jump down from the saddles and drown our snouts in the river. Swallows…long swallows. And with open eyes submerged in water I see mirage images of horses drinking and looking at me – horses beautiful and grateful for being granted this flash of luck.
But all these reminiscences are referred to mountain terrain. And how about looking at fluctuating mirage images in desert wilderness?
We – four topographers – are dragging along red sands of the Kyzyl Koom desert**. Torturing Thirst personified is craving for water. All of a sudden, we see a well at the sand-dune hill foot where there is a triangulation tower pointing at the sultry sky. And it turns out to be not desiccated. What a stroke of luck! We crank a handle. A bucket dropping down falls with a plop on water. Our eyes are brightening up. The winch is squeaking. The scorching chain is tinkling.
And at last here it is – the longed for crumpled bucket – with water. But terrible smell of rotten stuff repels all of us. Hands could not be sunken in such disgusting liquid! Burial breathing itself emanating from graves of the mazar*** located not far off has filled the crumpled bucket.
Heat from the sky is 50C above zero, and temperature of the scorching sand is plus 70C. You belong to the Sun. It is frying you
on a red-hot pan. 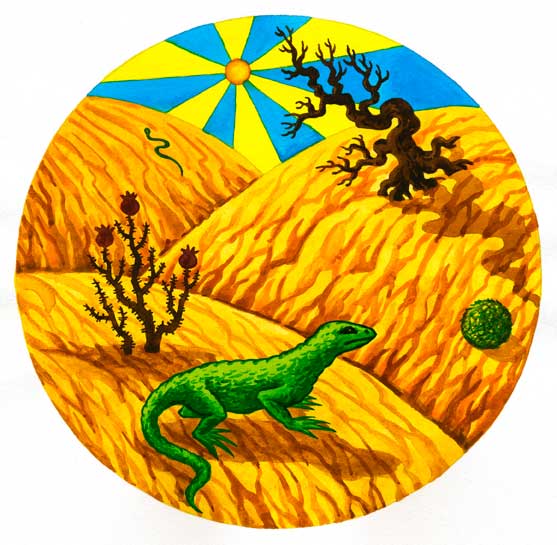 No nesting sites for birds.
No resting place for men.

Giant lizards cover up their tracks with long tails.
Plane-tables and maps cracked, as well as lips and face.

Mirage is playing in your eyes under a felt hat’s brims.
You count figures and check theodolite-level trims.

To hell with cities! These endless yellow sands
are ancient countries,
where you – a lonely Egyptian girl – roaming
through centuries.

Your boyfriend – a rod man – is looking from under
rust-colored eyebrows.
He‘s under a rod… like ants carrying home
small straws.

Back at the camp, there are packs on camels’ humps.
Fall down to drink – water’s boiling on human tongues.

In the tent – among tripods and T-squares
stained with ink.
The next birthday party is in full swing.

You touch guitar strings after festive drinks.
The moon’ll rise in arid deserts as if
above the seas.

** Kyzyl Koom is the vast desert in Central Asia notorious for its extremely continental climate.

*** An ancient necropolis in Central Asia.