Scientists at the University of Liverpool have shown that deep sea fault zones could transport much larger amounts of water from Earth’s oceans to the upper mantle than previously thought. 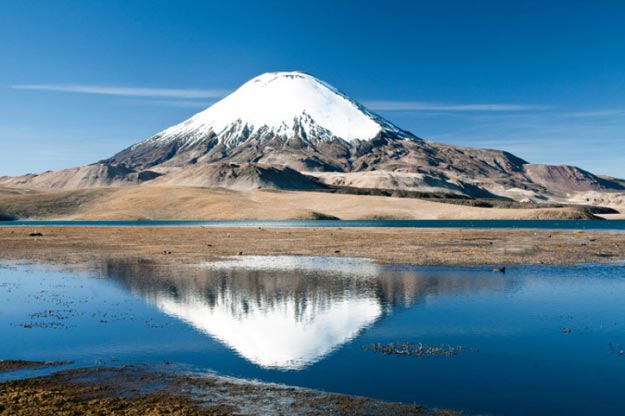 Parinacota, a volcano on the border of Chile and Bolivia.

Water is carried mantle by deep sea fault zones which penetrate the oceanic plate as it bends into the subduction zone. Subduction, where an oceanic tectonic plate is forced beneath another plate, causes large earthquakes such as the recent Tohoku earthquake, as well as many earthquakes that occur hundreds of kilometers below Earth’s surface.

Seismologists at Liverpool have estimated that over the age of Earth, the Japan subduction zone alone could transport the equivalent of up to three and a half times the water of all Earth’s oceans to its mantle.

Using seismic modelling techniques the researchers analysed earthquakes which occurred more than 100 km below Earth’s surface in the Wadati-Benioff zone, a plane of Earthquakes that occur in the oceanic plate as it sinks deep into the mantle.

Analysis of the seismic waves from these earthquakes shows that they occurred on 1 — 2 km wide fault zones with low seismic velocities. Seismic waves travel slower in these fault zones than in the rest of the subducting plate because the sea water that percolated through the faults reacted with the oceanic rocks to form serpentinite — a mineral that contains water.

Some of the water carried to the mantle by these hydrated fault zones is released as the tectonic plate heats up. This water causes the mantle material to melt, causing volcanoes above the subduction zone such as those that form the Pacific ‘ring of fire’. Some water is transported deeper into the mantle, and is stored in the deep Earth.

“It has been known for a long time that subducting plates carry oceanic water to the mantle,” said Tom Garth, a PhD student in the Earthquake Seismology research group led by Professor Andreas Rietbrock.

“This water causes melting in the mantle, which leads to arc releasing some of the water back into the atmosphere. Part of the subducted water however is carried deeper into the mantle and may be stored there.

“We found that fault zones that form in the deep oceanic trench offshore Northern Japan persist to depths of up to 150 km. These hydrated fault zones can carry large amounts of water, suggesting that subduction zones carry much more water from the ocean down to the mantle than has previously been suggested.

“This supports the theory that there are large amounts of water stored deep in the Earth.”

Understanding how much water is delivered to the mantle contributes to knowledge of how the mantle convects, and how it melts, which helps to understand how plate tectonics began, and how the continental crust was formed.