The oceans, atmosphere, continents and cryosphere are part of Earth’s tightly connected climate system. The ocean’s role in the climate system involves the transport, sequestration , and exchange of heat, fresh water, and carbon dioxide (CO 2 ) between the other components of the system.

When waters descend below the ocean surface, they carry with them dissolved atmospheric gases. The time-dependent tracers in the oceans provide information on which waters have been in contact with the atmosphere on various timescales. They also give information on the ocean circulation and its variability. 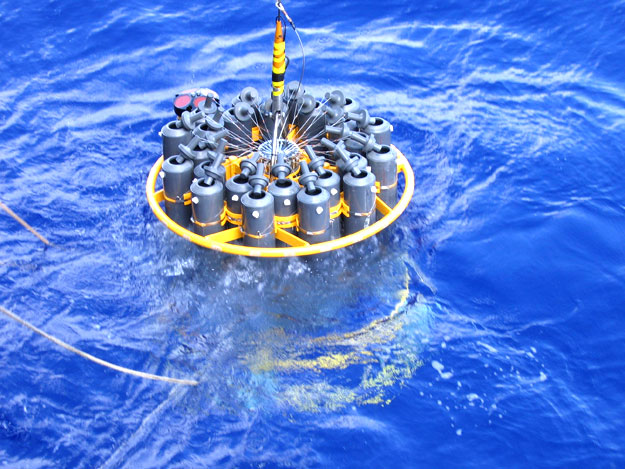 The timescale information is needed to understand and to assess the ocean’s role in climate change, and its capacity to take up human-derived constituents, such as CO 2 from the atmosphere. Thus, the advantage to using tracers for ocean circulation studies is the added dimension of time: their time history is fairly well known; they are an integrating quantity; and they provide an independent test for time integration of models and biogeochemical processes.

Tracers serve as a “dye” with which to follow the circulation of ocean waters. Conventional ocean tracers include temperature, salinity, oxygen, and nutrients. Stable isotope tracers, such as oxygen-18 and carbon-13, do not decay. In contrast, other radioactive tracers do decay. The radioactive tracers are naturally occurring, such as the uranium/thorium series and radium, and those produced both naturally and by nuclear bomb tests, such as tritium and carbon-14. The bomb contributions from the latter two are called transient tracers, as are the chlorofluorocarbons (CFCs), because they have been in the atmosphere for only a short time. The designation as transient tracer implies a human-derived source and a non-steady input function.

The decision of which tracer to use in an oceanographic application depends on the process involved and its timescale. The conventional ocean tracers and stable isotope tracers have no timescale associated with them; their use would depend solely on the natural process involved. For example, to decipher the fresh-water sources in the waters exiting the Arctic Ocean, salinity and the oxygen-18 isotope would be useful. The oxygen isotope is studied because precipitation and the melting and freezing of ice each has different fractions of the ratio of oxygen-18 to oxygen-16.

Deep waters that fill ocean basins form primarily in the high latitudes of the North Atlantic and Southern Ocean (the ocean around Antarctica). There is a close coupling of the surface waters in high latitudes to the deep ocean through the density-driven thermohaline circulation. During the process of deep-water formation, atmospheric constituents such as CFCs and CO 2 are introduced into the newly formed water. After these waters sink, they spread out through the deep oceans. As an example of the spreading of deep water from its source in the high latitude North Atlantic, CFCs are used as a tracer.