A foldable, inexpensive paper battery that can generate a small amount of electricity brings a new sense of power to origami, the Japanese art of paper folding. An engineer at Binghamton University in New York has developed a battery that creates power through the process of microbial respiration in a drop of dirty water on paper. 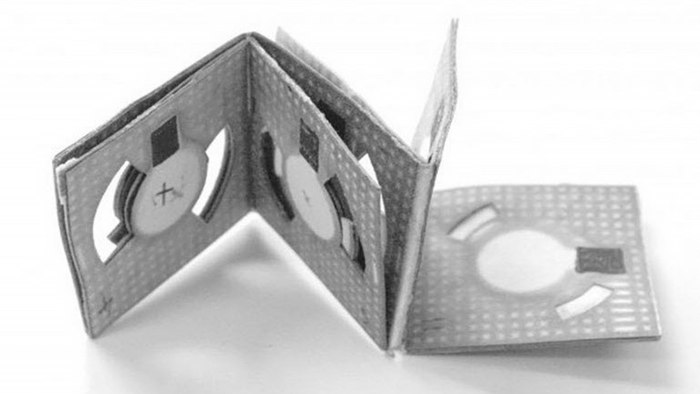 In the system, explained in the July issue of the journal Nano Energy, liquid containing bacteria can be used to power a paper-based sensor, which could be especially useful in areas and situations where access to electricity and resources are scarce.

“Any type of organic material can be the source of bacteria for the bacterial metabolism,” says Seokheun “Sean” Choi, the engineer who developed the battery. “And we don’t need external pumps or syringes because paper can suck up a solution using capillary force.”

The battery can fold down into the size of a matchbook and utilizes a cheap air-breathing cathode made of liquid nickel sprayed onto one side of a regular piece of paper. Actual origami techniques were used to create three-dimensional, stackable battery structures from the original, two-dimensional paper batteries.

The system doesn’t require specially engineered nanomaterials like those used to make other paper-based batteries in the past.

Creating one of the batteries capable of delivering enough microwatts to run a biosensor in the field costs only five cents. At the moment, the paper sensors need to be used with hand-held devices to conduct analysis on the data they gather, but Choi has received a three-year, $300,000 grant from the US National Science Foundation to create a self-powered system that can run the paper biosensor independently of other devices.

Some also see potential for the portable paper power tech to create diagnostic tools for disease control in the developing world. The bacteria that essentially acts as the ultimate power source can come from just about any easily available source, including local wastewater, biomass or watersheds.