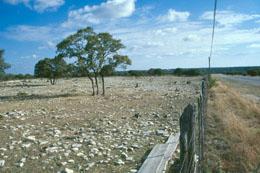 Trees and shrubs may help to keep water flowing in arid areas. The degraded area on the left of this picture could struggle to hold water in the same way. Charles Taylor

Most Texans know that ranchers don’t like shrubs. That’s because of an assumption that when woody plants move into an area, they greedily horde water and drain nearby rivers. That assumption is the driving force behind efforts from Texas to South Africa to clear shrubs from drought-prone land.

However, there is one problem — according to a study by researchers at Texas A&M University in College Station, that assumption may not be true. Hydrologist Bradford Wilcox and his colleague Yun Huang examined water levels going back to 1925 for four of Texas’s biggest rivers near the parched Edwards Plateau in the west of the state. What they found shocked them.

“Rivers on the Edwards Plateau not only are not disappearing, but they are increasing in flow,” says Wilcox, who is first author on the study, to be published in Geophysical Research Letters1. “By a lot. I mean, it’s doubled. That’s really big.”

The landscapes that Wilcox is describing are karst savannahs that are fed by groundwater and the occasional rain storm. A century ago, the Edwards Plateau was heavily populated by massive herds of cows, goats and sheep. However, as Texas developed, the number of herds diminished and left wastelands of eroded soil and rock. These ‘degraded’ landscapes slowly recovered and, eventually, aggressive woody shrubs such as juniper and mesquite blanketed what had once been prairie. Such plants today are demonized as greedy water drinkers, and ranchers are asking for government help in removing them. Yet, when Wilcox examined water records, he found an increase in water flows that he attributes to increased land cover by woody plants. Rain patterns in the area haven’t changed drastically and there has been little urbanization.

“I can’t really think of any other plausible explanation,” Wilcox says. “The obvious no-brainer is that it has had this massive change in land cover. There’s more vegetation, there’s more cover, there’s more protection. And so it allows more water to enter into the soil.”

Wilcox is careful not to expand his results beyond the study region of west Texas. The area’s karst formations — sedimentary rock often associated with layered cliffs and huge cave networks — are notoriously permeable and may not behave like other soils. Still, such formations are common and are found worldwide. Furthermore, many countries have taken measures to save water by eliminating woody plants from drought-affected areas regardless of the type of soil found there. These results might cause land managers to look for other solutions to mitigate drought.

Robert Jackson, an ecologist who studies water cycles at Duke University in Durham, North Carolina, says that it is not yet time to let woody plants off the hook. “I’m not saying he’s wrong,” says Jackson. “I’m saying I would have liked more evidence to convince me that the mechanism he’s attributing this to is the mechanism that’s operating.”

Indeed, Wilcox says that he would like to fill in some of the plant picture on a broader scale. He is hoping that upcoming efforts to clear brush will include money to monitor and evaluate whether the brush actually increases stream flow.