A recent discovery may add support to the theory that the water on Earth was brought by a rain of comets. Scientists have analyzed the comet Hartley 2, and discovered that ice found on it has the same composition as ocean water. The discovery was made utilizing an orbiting telescope on the Herschel Space Observatory, which can observe organic molecules by reading their far-infrared wavelengths. 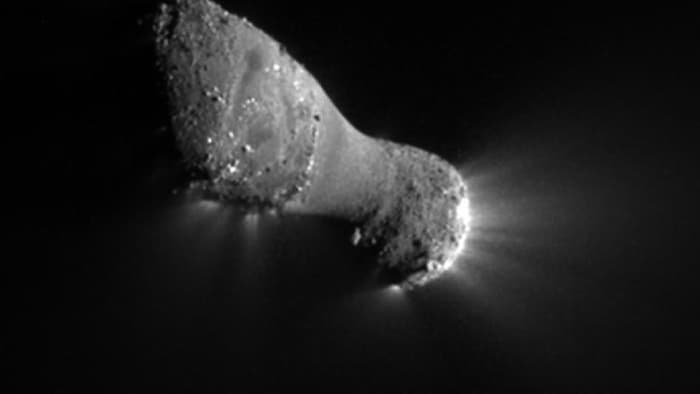 The Herschel Space Observatory has recently analyzed the comet Hartley 2, and discovered that ice found on it has the same composition as ocean water (image by NASA).

“At the time of the Solar System formation there may have been a large reservoir of such comets with the correct ratio that bombarded the earth,” says Paul Hartogh of the Max Planck Institute for Solar System Research in Katlenburg-Lindau, Germany.

“Life would not exist on Earth without liquid water, and so the questions of how and when the oceans got here is a fundamental one,” added University of Michigan astronomy professor Ted Bergin, “It’s a big puzzle and these new findings are an important piece.” Bergin is a co-investigator on HiFi, the Heterodyne Instrument for the Infrared on the Hershel Space Observatory.

Hartley 2 comes from the Kuiper Belt, a zone that is found near Pluto at the edge of the solar system, where there are many more comets which we know little about. The source of Earth’s water has been disputed for a long time, with previous theories believing that asteroids where the original water carriers. However, this new discovery strengthens the theory that the water present on Earth was most likely transported by comets from the Kuiper Belt.

“The results show that the amount of material out there that could have contributed to Earth’s oceans is perhaps larger than we thought,” Bergin said.