Water Bears Are the Master DNA Thieves of the Animal World

Tardigrades are animals that thrive in extremes. Also known as water bears or moss piglets, the aquatic, microscopic invertebrates can survive freezing and boiling temperatures as well as the harsh conditions of outer space. A dried-out tardigrade can be reanimated just by adding water—even decades later. They’re found on every continent including Antarctica, and they live in environments ranging from the deepest ocean trenches to the hottest deserts to the tops of the Himalaya. 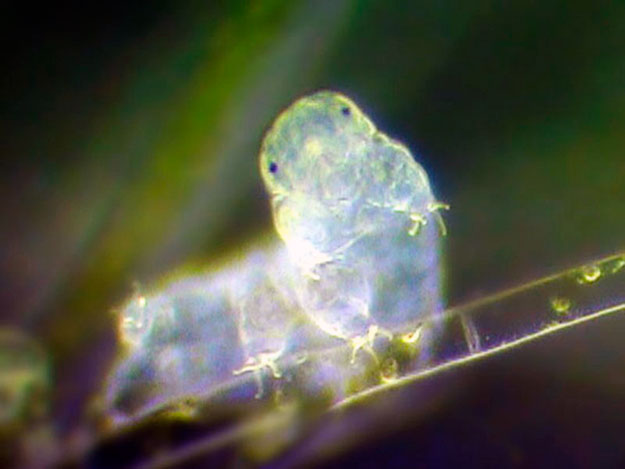 Now scientists have discovered that tardigrades possess yet another extreme claim to fame: Their genome contains the most foreign DNA of any animal species known.

Rather than inheriting all of their genes from their ancestors, tardigrades get a whopping one-sixth of their genetic makeup from unrelated plants, bacteria, fungi and archaeans, researchers report today in PNAS. The bizarre mashup highlights the fact that species can take shape in much less linear ways that commonly imagined.

“When most people think of the diversity of life and flow of genetic information, they picture a tree with big branches generating smaller ones, but without any connection between the limbs,” says study leader Thomas Boothby, a Life Sciences Research Foundation postdoctoral fellow at the University of North Carolina, Chapel Hill. “We’re beginning to realize that instead of the tree of life, it might be more appropriate to think of the web of life.”

Boothby turned to the tardigrade genome in the hopes of uncovering the most basic underpinnings of the creatures’ extreme survival strategies. To catalog every gene, he and his colleagues first extracted and sequenced many short chunks of DNA from thousands of tardigrades. Using a computer program, they stitched those sequences back together to produce the code in its entirety.

“When we did that, we initially saw that there were a lot of genes that looked like they didn’t come from animals,” Boothby says. “Our gut reaction was that we messed something up and must have contaminated our sample.”

To double check, the team turned to the polymerase chain reaction, a method that amplifies targeted regions of genetic material only if they match with specific primers. In this case, they wanted to see if they could amplify animal and bacterial genes as single units, which would only be possible if they were physically linked within the same genome. “We did that for over 100 genes, with 98-percent success,” Boothby says.

Convinced their reading of the genome was correct, the team then reconstructed the evolutionary ancestry of specific gene sequences. This confirmed that what looked like foreign genes actually were just that, rather than look-a-likes developed by tardigrades themselves.

“The results told us pretty unambiguously that genes that look foreign really are coming from non-animals,” Boothby says.

All told, the tardigrade genes are made of 17.5 percent foreign material. Most of those strange genes have bacterial origins—thousands of species are represented within the tardigrade’s genetic makeup. Many of the genes are known or suspected to play roles in stress tolerance for their original owners.

“I think the findings are extremely surprising,” says Andrew Roger, a biologist at Dalhousie University in Canada. That an animal could acquire such a large proportion of its genes from foreign sources is “amazing and unprecedented.”

In some cases, foreign genes have actually replaced tardigrade ones, while in others, tardigrades kept their own versions but incorporated single or multiple copies from one or several bacteria species. “We speculate that this wasn’t a one-time event, but probably was ongoing and may still be happening today,” Boothby says. 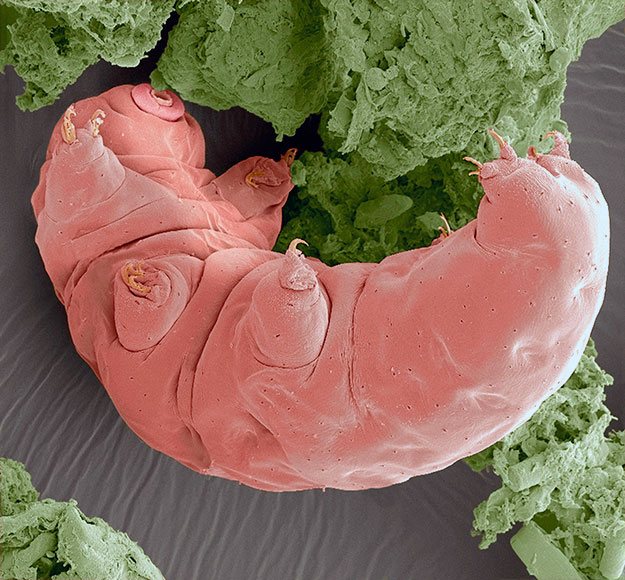 Researchers have known for years that bacteria and other microbes can engage in horizontal gene transfer—the swapping of genetic material between unrelated species. But only recently have scientists begun to realize that this method of genetic development can also occur in animals.

Compared to tardigrades, other animals’ genomes, including humans, contain very little foreign material. Until now, rotifers—another microscopic aquatic animal—held the record at 8 to 9 percent. For tardigrades and rotifers, the heavy dose of foreign genes likely plays a significant role in bestowing them with superior survival skills.

“If they can acquire DNA from organisms already living in stressful environments, they may be able to pick up some of the same tricks,” Boothby says. But precisely how tardigrades managed to cobble together so much foreign genetic material remains unknown.

Boothby and his colleagues suspect that the animals’ ability to dry out and reanimate might play a role. When tardigrades desiccate, their genomes fragment. After life-giving liquid restores them, the membranes surrounding their cells remain leaky for a while, and as the cells quickly work to repair their own genomes, they may accidentally work in some DNA from the environment.

“This paper confirms the importance of the study of the whole genome, here applied to an unusual but very interesting and often-neglected animal model,” says Roberto Bertolani, an evolutionary zoologist at the University of Modena and Reggio Emilia in Italy.

“One interesting point that the authors make is the possible relationship between desiccation, membrane leakiness and DNA breakages that may predispose these animals to incorporate and integrate many foreign genes.”

For now that’s just a hypothesis, so Boothby plans to investigate this and other lingering questions. His work with this extreme creature could even give humans a better shot at survival: Studying tardigrade genes may one day aid development of pharmaceuticals and vaccines that no longer have to be kept on ice and instead can be dried out and reanimated on the spot in a rural clinic or crisis zone.